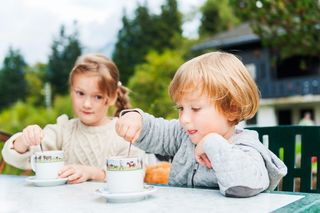 The happiest country in the world isn't in the tropics, as you might expect, but is known for its snow-covered peaks and delicious chocolate: Switzerland took the top spot in the 2015 World Happiness Report, a ranking of 158 countries by the Sustainable Development Solutions Network (SDSN), a network of leaders from academia, governments and the private sector that was launched with the U.N. Secretary-General Ban Ki-moon in 2012 to address sustainable development.

Switzerland is trailed by Iceland, Denmark and Norway. All four countries scored between 7.5 and 7.6 out of 10 for well-being, and the differences in the scores are not statistically significant, the researchers found. Rounding out the top 10 happiest countries are Canada, Finland, the Netherlands, Sweden, New Zealand and Australia, all of which scored 7.2 or higher.

The United States placed 15th, with a score of 7.1, according to the report. [See a List of the Most and Least Happy Countries]

The U.N. happiness report, published every year since 2012, shows that happiness and well-being are critical indicators of a country's economic and social development, according to a statement from the SDSN. What's more, the 2015 report, released Thursday (April 23), serves as a guide and reminder that world leaders should consider the happiness of their citizens whenever they make policy decisions, the U.N. statement said.

"The aspiration of society is the flourishing of its members," Jeffrey Sachs, director of the Earth Institute at Columbia University, said in a statement. "This report gives evidence on how to achieve societal well-being. It's not by money alone, but also by fairness,honesty,trustand good health. The evidence here will be useful to all countries as they pursue the new sustainable development goals."

Most of the differences in happiness among countries could be explained by six factors: levels of gross domestic product (GDP), life expectancy, generosity, social support, freedom and level of corruption, the researchers found.

The result of that calculation shows the average amount that the overall happiness score is higher in Brazil because of life expectancy, the researchers said.

After calculating the scores, the researchers found that people's well-being, including their emotions and life evaluations, are influenced strongly by social norms and institutions. The same held true on  neighborhood and national levels.

Social factors enhanced happiness when they were rooted and readily available. Those factors also made communities and nations more resilient, the researchers said. [7 Things That Will Make You Happy]

"As we consider the value of happiness in today's report, we must invest early on in the lives of our children so that they grow to become independent, productive and happy adults, contributing both socially and economically," said Richard Layard, a professor at the London School of Economics and director of the school's Well-Being Programme.

The results of the new report differ from those of a poll Gallup released in March, which found that Paraguay was the happiest of 143 countries. In that survey, Gallup researchers focused on daily positive emotions rather than overall life satisfaction. In that survey, participants answered questions about how happy they felt the day prior to the survey.

Editor’s note: This story was updated to show that the Sustainable Development Solutions Network published the report, not the United Nations.