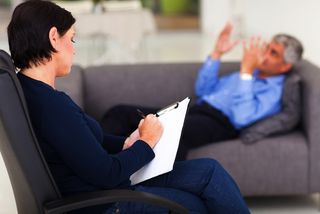 The Obama administration recently declared its support of a ban on minors receiving a controversial form of psychotherapy known as gay conversion therapy (also called LGBTQ conversion therapy). In supporting the ban, the president may have science on his side.

"The overwhelming scientific evidence demonstrates that conversion therapy, especially when it is practiced on young people, is neither medically nor ethically appropriate and can cause substantial harm," Valerie Jarrett, a senior adviser to President Barack Obama, said in a statement.

Gay conversion therapy — which its supporters claim can change the orientation of gay, lesbian and transgender people — has a long track record of not working, according to a review of the scientific literature published by the American Psychological Association (APA).

What's more, research suggests the treatment can worsen feelings of self-hatred and anxiety, because it encourages people to fight or hate a sexual orientation that can't be changed. [5 Surprising Facts About Gay Conversion Therapy]

The proposed national ban, known as Leelah's Law, was named after a transgender teen, Leelah Alcorn, who committed suicide in December 2014 after receiving treatment from therapists she said were biased and hostile toward her identity. Currently, licensed therapists cannot provide conversion therapy to minors in California, New Jersey or the District of Columbia, but the practice remains legal elsewhere in the country.

But is there scientific evidence to support a national ban on the practice?

Because being gay is not considered a mental disorder, most psychological organizations don't endorse treatments to change sexual orientation, which may be influenced by a person's genes. Research suggests that gay conversion therapy does not produce long-lasting sexual-orientation change in people who undergo it. In 2009, an American Psychological Association task force conducted a review of studies on gay conversion therapy between 1963 and 2007. They found that sexual-orientation change was uncommon; participants continued to be attracted to members of their own sex and not to those of the opposite sex.

In addition, because the therapy isn't approved by any psychological organizations, there are no guidelines on how to conduct it, and no standard metrics of success.

Nowadays, many gay conversion therapies use talk therapy and tie same-sex attraction to familial dysfunction — an overbearing mother or an uninvolved father, for instance.

The senior media editor at the Huffington Post, Gabriel Arana, chronicled his experience with gay conversion therapy in a 2013 piece for The American Prospect. His gay conversion therapist pinned Arana's same-sex attraction on the fact "that I felt inadequate because I had not had sufficient male affirmation in childhood."

But according to the APA, scientists don't agree on what causes someone to be gay. Some early studies hint that genetics or the regulation of certain genes may play a role in determining sexual orientation and, at the least, indicate that being gay is not a "choice," science suggests.

The APA report also revealed some evidence that gay conversion therapies increased the risk of negative outcomes, including loss of sexual feeling, anxiety, depression and suicidal feelings. In early aversive-therapy techniques, many people dropped out of treatment, the report found. High dropout rates can be an indication that many people found the treatment too harmful to continue.

According to the APA review, people who underwent modern talk-based gay conversion therapy also reported being harmed by it.

For instance, Samuel Brinton, a nuclear scientist who works on energy policy in Washington, D.C., reported seeing ex-gay therapists for years during his teen years, when his religious parents found out about his orientation.

One of those therapists told Brinton he was the last gay man on Earth and that, because "all gay men had AIDS," the 13-year-old Brinton did as well, he said in an interview with LGBTQ Nation.

The therapist also told him his chances of getting into heaven were "shrinking every day." Doctors also put copper coils around his wrists and blasted them with heat whenever he was shown pictures of men holding hands, he reported. During the course of the treatment, Brinton attempted suicide several times, according to the news report.