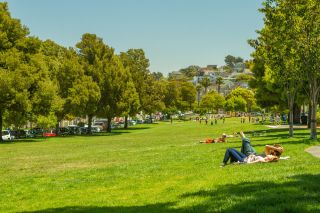 These San Francisco sunbathers may not know it, but spring is losing about 30 seconds every year.
(Image: © Hernán Seoane)

Spring arrives on Friday, and you might want to make the most of it. The season of flowers and showers actually gets shorter every year by about 30 seconds to a minute, due to astronomical quirks, researchers say.

This year, spring officially starts at 6:45 p.m. EDT on March 20, according to the U.S. National Weather Service (NSW). At that exact moment, which is called the vernal equinox, the Earth's axis will reach a halfway mark, where it points neither toward the sun (as it does on the summer solstice) nor away from the sun (as it does on the winter solstice), said Gavin Schmidt, the director of the Goddard Institute for Space Studies in New York City.

But for thousands of years, spring has been losing time in the Northern Hemisphere. This year, summer is the longest season, with 93.65 days, followed by spring with 92.76 days, autumn with 89.84 days and winter with 88.99 days, said Larry Gerstman, an amateur astronomer in New York. (Gerstman got his values from "The Astronomical Tables for the Sun, Moon and Planets," second edition, written by Jean Meeus and published in 1995 by Willmann-Bell, Inc.)

But why is this happening?

The main reason spring is getting shorter is that the Earth's axis itself moves, much like a wobbling top, in a type of motion called precession.

Spring will end, and summer will begin, just a little bit earlier in the year. [50 Interesting Facts About The Earth]

Over thousands of years, the shift in the time of the vernal equinox becomes more apparent. For instance, spring will be shortest in about the year 8680, measuring about 88.5 days, or about four days shorter than this year's spring, Gerstman said. (After that point, spring will lengthen again.)

Why spring is shorter than summer

Other aspects of Earth's movements also affect the exact length of the seasons. One is that Earth's orbit around the sun is not a perfect circle, but instead is elliptical. This means that the planet is not always the same distance from the sun. These days, Earth reaches the point in its orbit where it is closest to the sun, an event called perihelion, in early January. (In Greek, peri means near, and helios signifies the sun.)

This change in distance from the sun, of about 3.2 million miles (5 million km), isn't much compared to Earth's total distance from the sun, according to NASA, and people don't notice it. But the difference is large enough to change the speed of the Earth as it travels in its orbit. The Earth moves fastest when it's closest to the sun, and slowest when it's farthest, Schmidt said.

"We go through winter quite quickly, whereas in the summertime we're far away from the sun, and so we're going to go slower,"Schmidt told Live Science.

This change in speeds affects the length of the seasons. The Earth moves the fastest along its orbit path between December and March, hence both winter and spring are shorter than summer and autumn, he said.

At these distant dates, the Earth will be moving at its fastest speed later during the year, making spring even shorter. Perihelion will occur on the March equinox in the year 6430.

But spring will be shortest when perihelion occurs halfway through the season. And eventually, as perihelion and precession continue to change Earth's speed and wobble, spring will lengthen again, Schmidt said.

However, these changes are so minute that most people won't notice a difference during their lifetimes, Schmidt said. In fact, since most people associate spring with warm weather, he said, they will be more likely to notice that warm weather is beginning earlier in the year, because of climate change, than to be aware of the changing orbit.

"It's not something that anyone is going to notice unless you're an astronomer or a paleoclimatologist," Schmidt said.