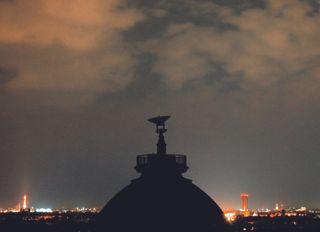 The last time anyone in a big city saw a dark and stormy night was when winds knocked out the power grid. Storm clouds looming over skyscrapers now glow orange with light pollution instead of providing the cover of darkness, a new study confirms.

"In a modern world, you would have to say it's a bright and stormy night," said Frank Hölker, a study co-author and ecologist at Leibniz-Institute of Freshwater Ecology and Inland Fisheries in Berlin, Germany.

Light pollution is the skyglow from artificial lights, which contaminate the natural sky at night. Before the era of artificial lights, clouds hid the light coming from the stars. But now, because of light pollution, the sky grows brighter when clouds roll in. "That's a complete flip from the way things were," said Phil Langill, a study co-author and director of the University of Calgary's Rothney Astrophysical Observatory. [See Photos of Light Pollution Around the World ]

The scientists tested night-sky brightness with sky-quality meters at 44 locations around the world, including a mix of rural, suburban and city sites. The selection of sites reflects participation by researchers (and what was nearby), rather than a random sampling.

Of the 22 cloudy sites examined in the study, only two behaved as they should under natural conditions, growing darker when clouds obscured the sky. The remaining locations brightened as the clouds reflected light pollution. Researchers could track the change in sky brightness across city boundaries, with cloudy skies glowing more intensely as one moved from rural to urban areas, the international team reported Feb. 12 in the journal Scientific Reports.

Before the new study, people had noticed the sky's eerie brightness at nighttime, but there were no systematic measurements of the effect, said lead study author Christopher Kyba, a physicist at the GFZ Center for Geoscience in Potsdam, Germany.

"We really didn't have a good idea of how bright the night sky is," Kyba told Live Science. "We're trying to build a global picture of how the sky is changing."

However, Kyba notes that for humans, some stormy city nights still seem intimidatingly dark because of street light glare and light scattered off wet pavement, which produce a blinding effect. "How much light there is is not really an important question to vision. It's how much light is distributed over all of the things that we can see," he said.

In cities, the natural cycles of the moon and stars are almost extinct, the study found. When the moon rose in cities on overcast nights, the sky's brightness barely changed. Yet in rural settings, the sky brightened considerably on cloudy nights after moonrise, the study reported.

The researchers also discovered that night sky brightness varied dramatically around the world. The brightest nighttime measurement was recorded in the Dutch town of Schipluiden, outside of Delft. "In the Netherlands, there is a huge effect due to greenhouses turning on their lights after midnight," Kyba said.

The night sky in Schipluiden was 10,000 times brighter than the darkest night sky detected in the study, which was reported from the Kitt Peak National Observatory in Arizona.

Most of the study locations were polluted by skyglow, the study found. In seven cities, the clear night sky was 10 times brighter than the natural sky would have been. In 30 cities, the night was twice as bright as the natural night sky almost year-round.

Kyba and his colleagues are concerned about the effects of skyglow on animals and plants. Some artificial light is helpful and necessary at night. But excessive, unwanted light can have serious health impacts on animals and plants, studies show. And satellite measurements show light pollution is getting worse despite increased attention to the problem.

"If you turn back the clock 200 years, on the darkest cloudy nights when there was no moon, predators had almost no chance to see anything," Kyba said. "If we add additional light, then it changes the predator-prey relationship."

Hölker added, "The skyglow has permanently removed dark nights from the landscape, and that has a lot of consequences for the whole ecosystem. A lot of animals use moon signals for foraging and reproduction."

On March 14, the researchers will enlist citizen scientists to assess light pollution at night. Here are three ways to take part in the night sky citizen science project. (No knowledge of constellations needed.):

In Globe at Night, volunteers compare the visibility of the stars in constellations like Orion with a set of star charts. You can either print the charts out in advance and report online later, or use the app. Globe at Night information is available in 26 languages.

2. Loss of the Night app

The Loss of the Night app directs you to specific stars in the sky, then asks whether you can see them with your own eyes. The app runs in 15 languages on Android and iOS devices.

The Dark Sky Meter app uses an iPhone camera to directly measure the brightness of the night sky. The app is available in a free and paid version.