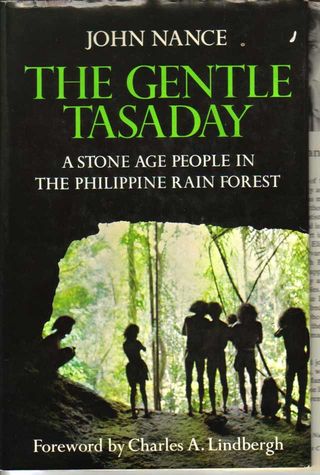 Cover of the John Nance book about "The Gentle Tasaday."

Last month a photograph released by advocacy group Survival International showed painted tribesmen in a remote Amazon village brandishing bows. They were said to have never had contact with the outside world.

Some media misreported the tribe as "lost" and previously unknown. This week the affair was incorrectly labeled a hoax by other news outlets. Finally, Survival International countered yesterday that it's no hoax. The group was not lost or unknown, it had just been "uncontacted."

While there is some dispute about the accuracy of labels such as "lost" or "undiscovered" being applied to the tribe (it was first known in 1910), a nearly identical claim made international news about 35 years ago.

The tribe was called the Tasaday, and they were touted as "noble savages," a peaceful tribe in harmonious co-existence with their environment. They lived in caves, and their technology had never advanced beyond axes and digging tools. The tribe was so gentle and peace-loving that their language had no words for "war" or "enemy."

They were the cover story in "National Geographic" magazine, as well as a popular book by John Nance called "The Gentle Tasaday: A Stone Age People in the Philippine Rain Forest." The Tasaday were visited by officials and celebrities, including Charles Lindbergh, who wrote the foreword to Nance's book. They were the subject of documentaries, TV specials, and dozens of magazine articles.

After a few years, the self-appointed spokesman and protector of the Tasaday, Philippine politician Manuel Elizalde, built a wall to protect the Tasaday from outsiders and exploitation. Armed guards were stationed to keep out reporters and curious onlookers; only a handpicked very few were allowed to visit the "lost tribe."

But some who did manage to get in started having doubts about the Tasaday.

One linguist noted that the tribe had words such as "roof," which would likely be unknown to the cave-dwelling Tasaday. Some reporters heard rumors that the Tasaday tribesmen were actually ordinary citizens from nearby villages.

Though there was some skepticism, the truth about the "lost tribe" of the Tasaday was not revealed until 1986, when Ferdinand and Imelda Marcos were removed from power.

With tight secrecy and government restrictions gone, a Swiss reporter visited the Tasaday and found that members of the tribe were living not in caves but in houses typical for the area. T-shirts and jeans had replaced loincloths on the members of the Tasaday, and they admitted that it had all been a hoax.

Elizalde had convinced local villagers to pretend to live in caves, in return for promises of money and aid. In fact, the local villagers who pretended to be Tasaday got little in return. Elizalde, the architect of the Tasaday hoax, skipped town in the early 1980s with a reported $35 million and a harem of teenage girls. He died at the age of 60 in 1997, ending the saga of another "lost tribe."

Benjamin Radford is managing editor of the Skeptical Inquirer science magazine. He wrote about hoaxes in his book" Media Mythmakers: How Journalists, Activists, and Advertisers Mislead Us." This and other books can be found on his website.