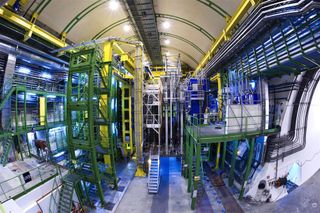 Two new subatomic particles have popped up at the world's largest atom smasher. The never-before-seen particles could help physicists glean key information about the building blocks of matter in the universe.

The Large Hadron Collider (LHC) near Geneva, Switzerland, is a veritable particle piñata: The massive underground machine accelerates two beams of protons to nearly the speed of light and smashes them together. Breaking the protons apart with so much energy creates a shower of new particles for scientists to study.

One of the experiments at the LHC, called LHCb, identified two never-before-seen baryon particles in their most recent particle cache. [Wacky Physics: The Coolest Little Particles in Nature]

“Nature was kind and gave us two particles for the price of one," Matthew Charles of the CNRS's LPNHE laboratory at Paris VI University, said in a statement.

Xi_b'- and Xi_b*- consist of one down quark, one strange quark and one bottom quark (also known as a beauty quark). Other particles consisting of this same quark combination were seen at the LHC in 2012, and by experiments at Fermi National Accelerator Laboratory in 2007.

So what makes Xi_b'- and Xi_b*- unique? The quarks contained in them have different "spins," — an important property of particles that includes a number and a direction. Differences in the quark spins can make two particles unique, even if they contain the same combination of quark types.

The differences in spin also give Xi_b'- and Xi_b*- slightly different masses, which is crucial to detecting them. In fact, "if [Xi_b'-] had been just a little lighter, we wouldn't have seen it at all," with the approach the scientists used, Charles said.

“If we want to find new physics beyond the Standard Model, we need first to have a sharp picture,” said LHCb’s physics coordinator Patrick Koppenburg from Nikhef Institute in Amsterdam. “Such high-precision studies will help us to differentiate between Standard Model effects and anything new or unexpected in the future.”

On July 4, 2012, scientists at the LHC announced they had found an elementary particle called the Higgs boson, which could help scientists understand how matter has mass. The Higgs is thought to be associated with a field that can impart mass on particles that pass through it. The discovery of the long-sought Higgs boson also represented the final piece of the puzzle predicted by the Standard Model.

The new baryon particles were detected from data collected from 2011 to 2012. After a long shutdown for upgrades, scientists are preparing the LHC to once again start colliding particles, but at higher energies and with more intense beams than ever before, according to CERN, the research organization that operates the LHC. The collider is scheduled to restart by the spring of 2015.

The new work appears online and has been submitted to the journal Physical Review Letters.