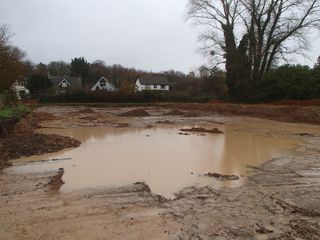 An ancient Roman pond, surrounded by bits of Roman pottery, garbage pits and even a bronze fingernail cleaner, was unearthed in Barnham, a village in southern England. The discovery provides evidence that Romans once occupied the region.

The artifacts, uncovered over the past several weeks, date back earlier than A.D. 100. Archaeologists found the pond on the last day of a survey that was required before construction could begin on a new housing development on the site.

"All the archaeological features appear today as filled with pale grey silt, and it is usually easy to see that these must be silted-up ditches, pits and post-holes," John Mills, West Sussex County Council’s senior archaeologist, said in a statement.

But one patch of silt, which formed a round "splodge" on the site, puzzled the archaeologists. On the last day of the excavation, they dug into the silt and found a shallow depression measuring about 1 foot (0.3 meters) deep and about 30 feet (9 m) wide. Although it's not lined with clay, as other Roman ponds were, it likely held water during the rainy seasons, Mills told Live Science. [Image Gallery: Trove of Roman Artifacts]

"It's unlined, so it couldn't have kept water all year round," Mills said. But the site is just a 5-minute walk from "a respectable stream," so the inhabitants likely didn't want for water, he added.

Perhaps the settlement's inhabitants used the pond as a watering source for livestock, such as cattle and sheep, he said. Archaeologists are now testing the soil to see what else they can learn about the site.

And while this was an unexpected find, unearthing ancient ponds is not all that infrequent, at least not on ancient Roman territory.

"In truth, I don't think that ponds are at all unusual on Roman rural settlement sites in Britain," Mills said. "On some Roman rural sites there were also waterholes, literally holes dug through natural clay down to the water table, sometimes with a step or two down to the standing water, to allow someone to pass up a bucket or other container from the surface of the water, just a few feet down."

The Romans are known for their sophisticated water management. Archaeologists suspect that the ditches on the site served to drain water. People would have to periodically dig out these ditches as rainwater, and possibly groundwater, caused silt to accumulate in the ditch.

If a ditch could no longer function, people likely dug new ditches alongside the old ones, Mills said.

Although much of the site's drainage system is reminiscent of Roman technology, the settlement may have predated the Roman conquest of Britain in A.D. 43, during the Late Iron Age. Moreover, life in the settlement likely continued until well after A.D. 200, experts said.

Pottery fragments found at the site in Barnham suggest that the inhabitants got their goods from a variety of places. Their pottery may have been forged in kilns from the local Arun Valley, known for its thriving industry, and other goods may have been acquired from the nearby Rowlands Castle and New Forest areas, the archaeologists said.

Some of the pottery may have come from France, which was also part of the Roman Empire. Anyone who could afford fine tableware pottery likely had money or, at least, affluent connections, Mills said.

"They're not just simple farmers," he said. "Someone with money is somewhere in the background, otherwise the imported pottery wouldn't be there."

The archaeologists also found a decorated fragment of bronze, likely used for manicuring, or cleaning, a person's fingernails.

"[It's] something you wouldn't expect to find on a poor farmer's farmstead," Mills said. "Something is going on at that site. People are using it who have a good bit of leisure time."

Several flue tiles, used for underfloor heating in stone Roman buildings, also hint that an important Roman building was located nearby, possibly a bathhouse or the house of a wealthy person, Mills said.