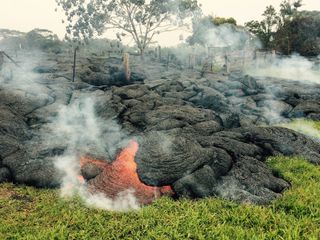 By Sunday, Oct. 26, one lobe of the lava flow was still moving through an open field near Pahoa (shown here) but a faster-moving tip has already advanced through the Pahoa cemetery.
(Image: © USGS/Hawaiian Volcano Observatory)

An oozing lava flow from Hawaii's Kilauea volcano picked up speed over the weekend, prompting local authorities and residents to prepare for possible evacuations on the Big Island.

The molten rock has been sporadically creeping downslope toward the small village of Pahoa. As of last night (Oct. 26), a portion of the lava stream had engulfed the Pahoa cemetery, according to the Hawaiian Volcano Observatory.

The volcanic flow has been moving northeast at a rate of 15 to 20 yards (13.7 to 18.2 meters) an hour, according to an update from Hawaii's Civil Defense Agency. Though residents of Pahoa have not yet been ordered to flee, emergency responders were going door to door yesterday in the immediate area to inform residents about the flow conditions and possible evacuation plans. The Red Cross also opened an emergency shelter in the nearby town of Keaau, HawaiiNewsNow reported. [See Photos of the Lave Flowing from Kilauea]

As of last night, at 9:30 p.m. local time (3:30 a.m. today EDT), the lava was just 600 yards (550 m) from Pahoa Village Road, and a portion of the street has been closed. The Civil Defense Agency warned that smoke conditions may worsen in some areas downwind of the lava flow as it burns through grass and vegetation. Scientists are also concerned about methane explosions that have been observed in the lava flow, NBC News reported. Pockets of trapped gas from decomposing plants trigger the blasts.

The so-called June 27th flow, named for the day it first spewed from a vent in Kilauea's Pu'u O'o crater, has inflated to chest-high depths in some areas as fresh lava accumulates under the flow's hard crust. The glowing orange to orange-yellow edges of the lava flow can reach temperatures higher than 1,650 degrees Fahrenheit (900 degrees Celsius), according to the Hawaiian Volcano Observatory.

Pu'u O'o crater is part of Kilauea's East Rift Zone, where vents and cracks have been spilling lava nonstop since 1983. Kilauea's continuous, 30-year eruption has wrecked dozens of nearby buildings in the surrounding area of Hawaii's Puna region, including the Hawaii Volcanoes National Park visitor center at Wahaula, the Royal Gardens subdivision and many homes and buildings in the town of Kalapana.

Scientists with the Hawaiian Volcano Observatory planned to continue monitoring the flow from the ground and had scheduled a flight over the area as well.