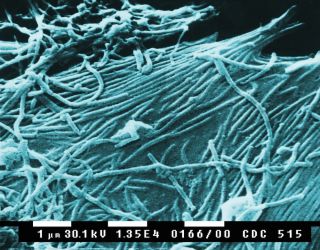 All passengers arriving in the United States from the West African countries where the Ebola outbreak is ongoing will now be monitored for 21 days, officials at the Centers for Disease Control and Prevention said today.

"Today, we are beginning a new system that will further protect Americans from Ebola," CDC Director Dr. Tom Frieden said at a news conference Wednesday (Oct. 22).

This "active post-arrival monitoring" will begin on Monday, Oct. 27 and will include journalists and health care workers returning from the region, as well as CDC staff, Frieden said.

The monitoring will add an additional level of safety to other measures already in place to prevent the spread of the virus, Frieden said. These measures include the current screening of passengers when they leave the three affected countries, and entry screening for the passengers arriving in five U.S. airports.

To date, the outbreak in Guinea, Sierra Leone and Liberia has sickened more than 9,200 people, including more than 4,550 who have died. [2014 Ebola Outbreak: Full Coverage of the Viral Epidemic]

"CDC currently shares information gathered during airport entry screening with state and local public health officials so they can stay in contact for 21 days with people entering the United States from these three countries," Frieden said.

The information collected from the individual includes an address for the next 21 days, two email addresses, two telephone numbers, a home address, and the same information for a relative or a friend in the United States. "This information is essential to health departments as they track individuals who've arrived in this country," Frieden said.

The screening and monitoring measures were prompted after one passenger with Ebola arrived in the United States in September. That patient, Thomas Eric Duncan, died earlier this month at Texas Health Presbyterian Hospital in Dallas.

Subsequently two nurses who helped care for Duncan came down with the disease. Nina Pham, the first of the two nurses to contract Ebola, has had her health status upgraded from "fair" to "good," according to a statement released Tuesday by the National Institutes of Health. The second nurse, Amber Vinson, is being treated at Emory University Hospital in Atlanta.

The new monitoring rules mean that even people who don't have a fever when they arrive in the United States, and who don't report exposure to Ebola in the entry screening, will still have to provide information to health officials, and report their temperature once a day for 21 days.

People can contract Ebola if they have contact with contaminated objects (such as needles) or the bodily fluids of a person who is sick with the virus. It can take between two and 21 days for an infected person to start showing symptoms. After 21 days, if an exposed person does not develop symptoms, he or she will not become sick with Ebola, according to the CDC.

Frieden emphasized that it's not rare for people to have symptoms similar to those of Ebola, but to actually have another disease such as malaria or diarrhea caused by a common pathogen. "The bottom line here is we have to keep up our guards against Ebola," Frieden said.