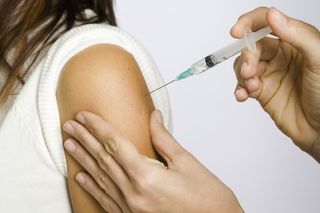 A woman receives an injection of a vaccine
(Image: © Vaccination photo via Shutterstock)

Add one more condition to the list of things that vaccines don't cause: Multiple sclerosis.

Scientists looked at about 4,700 people who received vaccines against hepatitis B (Hep B) and the human papillomavirus (HPV), and found no long-term risk of developing multiple sclerosis (MS) or similar nervous-system diseases.

Some anti-vaccination groups had raised concerns that the proteins in the Hep B and HPV vaccines could lead to the destruction of myelin, the insulating material that surrounds the parts of nerve cells called axons. Such damage, called demyelination, is the hallmark of several neurodegenerative autoimmune diseases — most commonly, MS.

Previous studies on this topic have been small. While most have found no connection between vaccination and MS, two studies did suggest a slight increase in risk, so the issue has remained controversial. [5 Dangerous Vaccine Myths]

This latest study is the largest to date and followed patients for three years after their vaccinations, said the researchers at Kaiser Permanente Southern California, a company that offers health insurance (and does not produce any vaccines or drugs). The results are published today (Oct. 20) in the journal JAMA Neurology.

The researchers wrote that the small risk of developing MS seen in some earlier studies suggests that the vaccine, like an infection, may accelerate the disease's progression in patients who already have MS or other neurodegenerative autoimmune diseases. It may be that after vaccinations, patients move more quickly from the "subclinical" stage of the disease, when no outward symptoms are seen, to a stage with visible symptoms, the researchers said.

The lead author of the report, Dr. Annette Langer-Gould, noted that the new study could not fully rule out a connection between the HPV vaccine and MS because the sample size of vaccinated patients was limited. Therefore, a larger study would be needed to confirm the results, she said.

However, the authors wrote that any association is likely coincidental. For example, young women are the group with the highest risk for MS, and they receive the HPV vaccine at a time when they could be diagnosed with MS. The situation is analogous to how autism reveals itself in babies coincidentally around the age of several vaccinations.