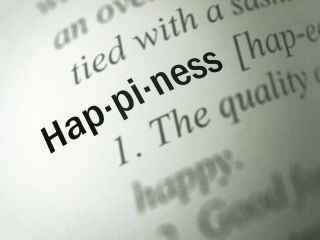 A close-up on the dictionary definition of happiness.
(Image: © alejandro dans neergaard , Shutterstock)

Panama may be the happiest country in the world, racking up the highest score in the Gallup-Healthways Global Well-Being Index for 2013.

In contrast, conflict-afflicted countries such as Syria and Afghanistan showed the lowest scores in this survey of 135 countries. The United States came in at number 14 in the poll.

The Global Well-Being Index aims to gauge people's perceptions of their well-being, by looking at financial status as well as four other factors that contribute to well-being: social well-being, which means having supportive relationships and love in life; community well-being, which is about liking one's place of residence; having purpose and goals; and physical health.

Only 1 in 6 adults (17 percent) worldwide were considered to be "thriving" in at least three of these five elements of well-being. The majority of global populations were "struggling" or "suffering" in many of these domains, the researchers found. [Happiest Countries: See the Well-Being Scores of 135 Countries]

"Each element of well-being is important on its own, but the elements are also interdependent and well-being is more than the sum of the elements," Gallup officials said in a statement. "That only 17 percent of residents in the 135 countries and areas surveyed are thriving in three or more elements underscores how most of the world is struggling to achieve high well-being."

Residents of the Americas region, which includes the United States, Latin America and Canada, were the most likely to be thriving, with 33 percent of people in this region thriving in three or more elements, while only 9 percent of people in sub-Saharan Africa did so, according to the report.

The situation is worse in Syria and Afghanistan, two conflict zones. Only 1 percent of Syrian and Afghan adults were thriving in three or more elements.

Here are the 10 happiest countries, with the percentage of people who are "thriving" in three or more of the elements of well-being:

Latin Americans were most likely to be thriving and generally reported higher levels of well-being than people in any other regions, the researchers found. "This is consistent with other Gallup World Poll research that shows residents of Latin America generally evaluating their lives more highly than those in other regional groups, partly reflecting a cultural tendency in the region to focus on the positives in life," Gallup officials said. [7 Things That Will Make You Happy]

Panama had the highest scores in the world in four of the five well-being elements — purpose, social, community and physical well-being. Sixty-one percent of Panamanians were thriving in three or more elements, the survey found.

"Panama's strong and growing economy, an unemployment rate of 4.5 percent in 2013, and national development may be the most significant factors contributing to its high thriving levels," Gallup officials said.

Costa Rica came in second, with 44 percent of its people thriving in three or more elements of well-being. Denmark stood at third place with 40 percent of its resident thriving.

Countries that had the highest financial well-being were located in northern and central Europe. Sweden led the world with 72 percent of people thriving financially.

In the United States, just 33 percent of its residents are considered to be "thriving" in three or more of the well-being elements, putting the U.S. in the top 20 happiest countries. "The U.S. in 2013 had good-but-not-great well-being compared with the rest of the world," the Gallup statement read.

Most measurements of national performance focus on countries' income, but measures such as health, education and security also contribute to well-being, experts say.

"When we ask people to think about how their lives are going, to report on their daily emotions, and to tell us about their health, we gain a much broader picture of their well-being than can be inferred from traditional economic surveys," Angus Deaton, a scientist at Gallup and a professor of economics and international affairs at Princeton University, wrote about the Gallup report.