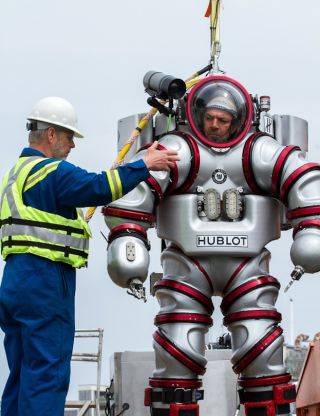 The high-tech Exosuit is being put to good use this month: Marine archaeologists will use the metal diving outfit to explore the famous Antikythera shipwreck off the coast of Greece.
(Image: © Courtesy of Brendan Foley)

A group of marine archaeologists kicked off a mission this week to explore an ancient shipwreck at the bottom of the Aegean Sea — not with a sub, but with a semi-robotic metal diving suit that looks likes it was taken straight out of a James Bond movie.

Sponge divers first discovered the 2,000-year-old shipwreck off the Greek island Antikythera in 1900. They recovered fragments of bronze statues, corroded marble sculptures, gold jewelry and, most famously, the Antikythera mechanism, a clocklike astronomical calculator sometimes called the world's oldest computer. Teams led by Jacques Cousteau pulled up more artifacts and even found human remains when they visited the wreck in the 1950s and 1970s.

But none of those previous expeditions had access to the Exosuit, a one-of-a-kind diving outfit that weighs 530 lbs. (240 kilograms), and can plunge to the extraordinary depths of 1,000 feet (305 meters) and stay underwater for hours without the diver being at risk of decompression sickness. [See Photos of the Exosuit and Antikythera Shipwreck]

Brendan Foley, a maritime archaeologist from the Woods Hole Oceanographic Institute (WHOI) in Massachusetts, is co-director of the 2014 Antikythera mission, in partnership with the Greek Ephorate of Underwater Antiquities.

"It's likely that sediment will hold the kind of stuff we can't even imagine," Foley told Live Science back in June, when the team was preparing to observe and collect bioluminescent organisms off the coast of Rhode Island. "Our eyes light up thinking about it. It's the kind of thing that wakes you up in the middle of the night. These are artifacts that have never been seen since the time of Caesar."

The Antikythera wreck settled more than 200 feet (60 m) below the surface during the 1st century B.C., but some of the cargo onboard dated back to the 4th century B.C. Historians have speculated that the vessel was carrying loot from Greece to Rome during the era of Julius Caesar.

An Exosuit-clad archaeologist could unearth artifacts that help scholars learn more about the ship's story. During a preliminary expedition to the site in 2012, Foley and his colleagues used sonar to detect intriguing targets at the wreck site, which look like boulders but could be huge statues, according to WHOI's Oceanus magazine. The team also plans to explore a second wreck nearby that could have been the Antikythera ship's traveling companion, as well as the bottom of an undersea cliff — potentially around 400 feet (120 m) deep — where additional artifacts from the wreck may have slipped over the years, beyond the reach of divers.

Made by the Canadian company Nuytco Research, the Exosuit has four 1.6-horsepower thrusters that can propel a diver up, down, forward, backward, right or left. The Exosuit protects its wearer from decompression sickness because it maintains the level of air pressure humans experience at the surface. Without the threat of the bends, a diver can be pulled up to the surface in just two or three minutes if anything goes wrong.

The team is posting updates about its mission on a blog and on Facebook.