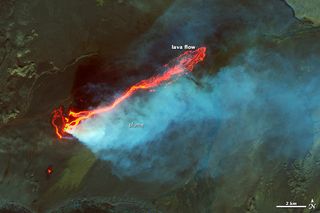 Ice, steam and volcanic gas appear bright blue in the image. Dyngjujokull glacier fills the bottom left corner of the image, and a sulfur dioxide gas plume wafts to the right. The noxious gas has spawned toxic volcano tornadoes and drifted as far as Norway and Greenland.

The latest addition to Iceland's landscape also stands out in a combined before-and-after radar image from the TerraSAR-X satellite, operated by the German Aerospace Center. The separate images, shot on Aug. 13 and Sept. 4, reveal differences in the Earth's surface. The rough lava surface stands out in the lower right corner. Askja volcano and its crater lake are in the lower center.

The lava flow continues to advance by about 0.6 miles (1 km) per day, according to the Icelandic Met Office. The agency's scientific advisory board said the eruption would likely follow one of three scenarios. These are listed in order of impact, not in the order of probability: