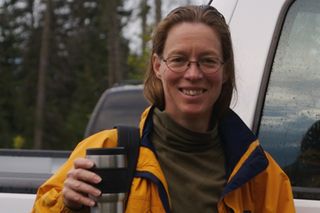 Julia Parrish is the founder and executive director of the Coastal Observation and Seabird Survey Team (COASST) and a professor at the University of Washington. She is shown here on a COASST field visit to Homer, Alaska.
(Image: © M. Renner)

As a scuba diver and a marine conservation biologist, Julia K. Parrish frequently dives into her work with wild abandon — literally. But as the executive director of a citizen science group that organizes volunteers to monitor beach-cast seabird carcasses, Parrish even more frequently keeps both feet firmly planted on the ground — or to be more specific: on the coastline.

Parrish founded COASST in 1998 with a band of 12 volunteers. Since then, Parrish has grown COASST, which is partially funded by the National Science Foundation, to a team of about 800 coastal residents from varied walks of life who collect data from more than 350 sites in California, Oregon, Washington and Alaska. For her leadership in citizen science, Parrish won a White House Champion of Change award in 2013. [Power To The People? Everyone Can Do Citizen Science (Op-Ed)]

Why do COASST volunteers study beached bird carcasses rather than live birds? Because accessing live birds is a daunting task, even for professional scientists and expert birders. But beached birds regularly wash ashore and are relatively easy to identify. In addition, changes in the numbers and causes of beached birds may reflect important ecological changes related to natural cycles or human factors.

All COASST data is independently validated by experts.

COASST data helps establish baseline patterns of beached bird mortality — information that may be used by scientists and natural resource managers to help identify the impacts on birds of phenomena as diverse as harmful algal blooms, oil spills, climate change and fishing.

For example, in 2009, COASST documented the single largest die-off of seabirds due to a harmful algal bloom  anywhere in the world — estimating the death toll between 8,000 and 10,000 birds. This estimate could not have been developed without baseline data about beached bird patterns that had been generated by 80 COASST volunteers via regular surveys of area beaches during previous years.

In addition, COASST data informs many analyses of the potential impacts of resource development on coastal ecosystems in the Pacific Northwest. COASST data also has been incorporated into many scientific papers on various topics, including the impacts of coastal net fisheries on bird mortality.

The growing power of citizen science

The increasing importance of citizen science to scientific advancement and the many and varied citizen science programs supported by National Science Foundation are discussed in an article, Novel Answer to That Perennial "Earth Day" Question: "What Can I Do to Help?"