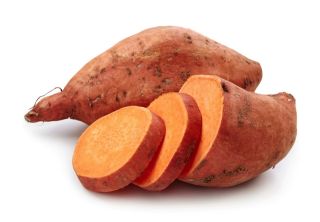 Sweet potatoes are a good source of the mineral potassium.
(Image: © Sweet potato photo via Shutterstock)

For older women, eating potassium-rich foods may reduce the risk of having a stroke, a new study finds.

Researchers studied more than 90,000 women ages 50 to 79, for an average of 11 years. They looked at how much potassium the women consumed from natural foods in their diet, as well as if they'd had a stroke or died during the study period.

The women who ate the most potassium had a 10 percent lower risk of dying from any cause during the study period, compared with women who had the lowest potassium intake.

"Fruits and vegetables are good sources of potassium," study co-author Sylvia Wassertheil-Smoller, a researcher at Albert Einstein College of Medicine in New York, said in a statement. "Our findings give women another reason to eat their fruits and vegetables." [8 Top Meals from Nutritionists]

The link between potassium intake and a lower risk of stroke was stronger among women in the study who didn't have high blood pressure, the researchers found. Among these women, those who ate the most potassium had a 27 percent lower risk of ischemic stroke and a 21 percent reduced risk for all stroke types, compared with women who ate the least potassium.

Among women who had high blood pressure or were taking medication for the condition, those who ate the most potassium had a lower risk of dying during the study period, but potassium intake did not lower their stroke risk.

This finding suggests that higher potassium intake may be more beneficial before people develop high blood pressure, according to the study, which was published today (Sept. 4) in the journal Stroke.

Potassium is an important nutrient in the diet, because it lessens the effects of salt, and studies have suggested it may help prevent high blood pressure, a major risk factor for heart disease and stroke.

Stroke is the fourth leading cause of death in the United States. Each year in the U.S., about 800,000 people have a stroke, and about 130,000 people die from a stroke, according to the Centers for Disease Control and Prevention.

The U.S. Department of Agriculture recommends adults eat no more than 1,300 milligrams of salt and at least 4,700 mg of potassium daily. In the new study, the researchers didn't examine the women's salt intake, but only 2.8 percent of women met the recommended level for potassium intake. On average, the participants consumed 2,611 mg of potassium daily, as measured by researchers at the start of the study.

"The World Health Organization's daily potassium recommendation for women is lower, at 3,510 mg or more," Wassertheil-Smoller said. "Still, only 16.6 percent of women we studied met or exceeded that."

Other sources of potassium range from leafy greens and tomatoes to dairy foods and meat. For example, one cup of cooked spinach contains 840 mg of potassium, a medium baked potato provides 800 mg and a medium-size banana contains 450 mg of the mineral, according to the Academy of Nutrition and Dietetics.

However, consuming too much potassium can be dangerous, particularly for older people and those with kidney disorders, according to the American Heart Association. Therefore, people who are thinking about increasing their potassium intake through supplements, rather than getting it in food, should consult their doctor to see how much of the mineral they should consume, Wassertheil-Smoller said.