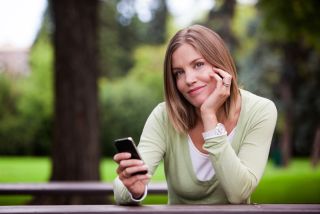 Lying while sexting may be a nonphysical, "mobile" version of faking an orgasm, a new study suggests.

Nearly half of the people in the study who had ever sent sexual texts had lied to their committed sexting partners about what they were really wearing or doing while sexting.

Moreover, lying while sexting was more common among women, as 45 percent of them reported sending the false messages, compared with 24 percent of men. Most people who lied did so in order to fulfill the needs of a partner in some way; overall, about two-thirds of the people who provided relevant responses said this was the reason they lied during sexual text exchanges. [The 10 Most Surprising Sex Statistics]

(In another recent study, researchers found 80 percent of participating college students said they received sexts, while 67 percent had sent such messages; in that same study, detailed in the Aug. 17, 2013 issue of the journal Cyberpsychology, Behavior, and Social Networking, 46 percent of participants said they sent sexts with pictures and 64 percent received such photo sexts.)

"Most people lie [while sexting], because they want to please their partner," said study co-author Michelle Drouin, an associate professor at Indiana University – Purdue University in Fort Wayne.

Study participants listed several reasons for lying, including wanting to make a partner happy or fulfill a partner's fantasy. "He wanted it, but I did not want to do it," explained one participant, while another noted the lie was "to satisfy her needs." Others said they lied to avoid upsetting their partners.

In the study, the researchers examined the prevalence of sexting among 155 college students — 62 men and 93 women. The students filled out a survey, which asked if they had ever lied about what they were wearing or doing while sexting with a committed partner. In another survey, students answered questions about how attached they typically got in relationships and how much reassurance they needed from their partners.

Some people in the study who reported having lied while sexting said they did so to serve their own needs, for instance to "get in the mood," the researchers wrote in the June issue of the journal Computers in Human Behavior. Other participants said they wanted to see how their partners would react to their "fake" texts. But some people lied because they were bored or there were other people around while they were texting, and they just chose not to share this information with their partners.

The new findings are in line with a previous study, published in 2010 in the Journal of Sex Research, which found that 25 percent of men and half of women in the study faked orgasm. Participants in that study gave several reasons for faking orgasm, including wanting to benefit their partners in one way or another, or being driven by a desire to just end sex, the researchers of that study wrote.

"In relation to other types of sexual deception, the overall incidence of lying during sexting is slightly lower than pretending orgasm in a face-to-face context," Drouin and her colleagues wrote in the Computers in Human Behavior study, citing previous research.

As for the difference in the percentage of women and men who lie while sexting, it may have something to do with the way women are often taught to lie to serve the needs of others, Drouin told Live Science. Alternatively, many of the women's partners were the ones soliciting sexual texts, and the women were the ones responding. So perhaps they were not as into the sexting and just responded with what they thought their partners wanted to hear, Drouin said.

The researchers warned that, as with any other lies, the ones made up while sexting can harm relationships and diminish their quality.

"Thus, perhaps, people should forego the false descriptions of sexy underwear and wild sexual acts, and instead describe the television shows they are watching in their flannel pajamas," the researchers concluded in the study.