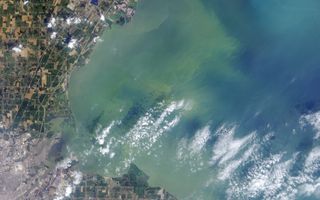 An algae bloom in Lake Erie that left hundreds of thousands of people in Toledo, Ohio, and its surroundings without water for two days is visible in new satellite imagery.

The bloom appears as a cloudy green mass in the blue of Lake Erie. Toledo is in the lower left of the image, along the lake's shore.

The mayor of the city lifted a ban on drinking Toledo's water on Monday (Aug. 4), after two days in which residents were warned that water from the Collins Park water treatment plant was contaminated with a toxin produced by the freshwater algae Microcystis. The treatment plant serves 500,000 customers in Toledo and its suburbs.

If ingested, the Microcystis toxin causes symptoms such as dizziness, vomiting and numbness. Though there are no reports of human deaths from the toxin, it can cause liver damage, according to Californa's Office of Environmental Health Hazard Assessment (OEHHA). Pets and wildlife have died from the toxin, according to OEHHA.

Boiling water does not remove the toxin, so residents found themselves lining up at stores and distribution centers in search of bottled water. Farmers from outside the city pumped well water and brought it into town to give away for free, according to news reports.

Algae blooms are fed by fertilizer runoff, which brings nitrogen and phosphorous into the water.

This image of the toxic bloom was captured by the Landsat 8 satellite on Aug. 1. This satellite's instruments capture wavelengths of light that allow researchers to adjust for atmospheric distortions that occur near coasts, according to NASA's Earth Observatory.