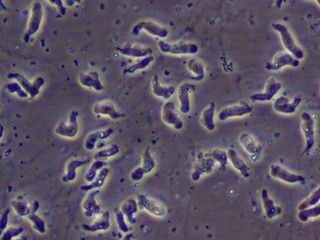 A prepared slide of Naegleria fowleri taken from a patient with primary amebic meningoencephalitis.
(Image: © CDC)

A rare heat-loving amoeba caused an infection that killed a 9-year-old girl in Kansas on July 9, and new research may help shed light on how it and other similar infectious diseases spread.

For instance, brain-eating amoebas lurk in warm bodies of water, where they can find unsuspecting hosts, entering the host's brain through the nose. The Kansas girl likely picked up the rare parasite after swimming in one of several local lakes, news reports suggest. The infection caused by the amoeba is rare — only 132 cases have been reported in the United States since 1962, according to the Kansas Department of Health. [7 Devastating Infectious Diseases]

These kinds of diseases are poorly studied, because they emerge sporadically. Now, researchers have created a mathematical model to illustrate the differences between the spread of more conventional infectious diseases, like HIV and the flu, and the spread of sapronotic diseases, like anthrax (caused by Bacillus anthracis), Legionnaire's disease and primary amebic meningoencephalitis (the infection that killed the Kansas girl who picked up the amoeba).

"Sapronoses do not follow the rules of infectious diseases that are transmitted from host to host," Armand Kuris, a professor in the University of California, Santa Barbara's Department of Ecology, Evolution, and Marine Biology, said in a statement. "They are categorically distinct from the way we think infectious diseases should operate."

For a conventional infectious disease to spread successfully, it must infect a new host before its current host dies or recovers (and so kills the "bug"). This so-called "host-density threshold theorem" advances the idea that a disease epidemic can only happen if the disease can infect more than one host before it kills its current host, or the host recovers.

The entire premise behind human efforts to fight infectious diseases is based on the threshold theorem. If enough people are vaccinated, then the number of potential new hosts drops off so that epidemics are prevented. However, sapronotic infectious diseases don't fit the threshold theorem, as they don't depend on a population for survival. They lie in wait for an opportunity to infect a host.

The larger a sapronotic disease population gets, the more likely it is that a host will become infected, according to the researchers' model. But unlike conventional infectious diseases, sapronotic diseases do not require a minimum number of hosts to survive, Kuris explained. Other infectious diseases can't survive in a population if the population gets too low — the disease needs a living host, so when it runs out of people or other animals to infect, it eventually dies out. These diseases can be eradicated by isolating and treating those infected. A sapronotic disease is different, because even after it has been eradicated from a population, the disease can emerge again later from the water or soil in which it lives.

"Controlling sapronoses is not about treating infected hosts,” the researchers write in the August issue of the journal Trends in Parasitology. "Whereas treating infected individuals will remain the most important and urgent response to combat sapronoses, controlling them requires reducing contact with, or sterilizing or otherwise altering, the environments where they proliferate."

As humans continue to colonize more and more areas of the world, it is likely they will become exposed to more sapronoses, the researchers write in the paper. More research is needed to better understand how the diseases spread.