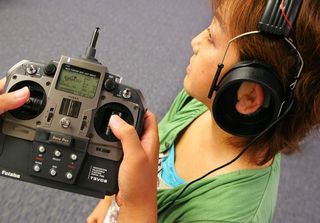 Associated Press business writer Yuri Kageyama tries on a headset to be remote-controlled by a technology that Nippon Telegraph and Telephone Corp., Japan's top phone company, is developing during a demonstration at an NTT research in Atsugi, near Tokyo, Tuesday, Sept. 7, 2005. Called galvanic vestibular stimulation in scientific jargon, it means electricity is messing with the delicate nerve tissues inside the ear to maintain balance and make people move to the left or right against their will. (APPhoto/Itsuo Inouye)

Next to fire, the remote control may arguably be the greatest invention created by man. Developed by the German military in the First World War to crash Allied boats, the remote control has evolved into the must-have weapon of choice for couch commandos worldwide.

The remote control has so captivated all of us that we often forget that there are actually control buttons on the television. Is the remote control the ultimate temptation to the deadly sin of sloth or an indispensable convenience of modern day life?

Either way, let's take a closer look at this marvelous technological achievement.

In an infrared (IR) remote, every button you press corresponds to a unique binary code. There is a binary code for power on and a different code for volume up.

From the emitter located at the top of the remote, the binary code is sent from the transmitter to the transceiver using a series of infrared light pulses. The transceiver decodes that code and executes the requested function. For example, when you press the volume up button on the remote (transmitter), it sends the corresponding code to the television (transceiver). The television receives that code and translates it into action—VOLUME UP.

RF remotes have two advantages over their IR counterparts. First, the typical range of an RF remote control (100 feet) is far superior to that of an IR remote (30 feet). Second, unlike an IR remote that requires line of sight (an unobstructed path from the transmitter to the receiver), an RF remote control uses radio waves that can transmit through walls and around corners. This second advantage allows RF remotes to control electronic equipment in cabinets or even in other rooms.

One remote to rule all

In the modern home, the home entertainment system can consist of a DVD player, television, cable/satellite box, stereo, and maybe even a VCR. This results in a gaggle of remote controls. To prevent drowning in the sea of remotes, a universal remote keeps you afloat with its ability to control all the audio and video components in your home entertainment system using one convenient device.

Depending on your need, there are universal remotes that control from five up to a couple of hundred different components.

Just place the learning remote into programming mode, press a key on it that you will want to use for a specific command, then press the corresponding key on the teaching remote control. You will also have the flexibility of teaching the learning remote only the signals you want it to learn.

A major advantage of the learning remote control is that it can learn functions—like the "subtitle" button to turn on subtitles on a DVD player—not typically supported by default on a universal remote.

Fancier remotes have more robust features, such as PC configuration and macro programming.

PC configuration allows a remote control to be connected to your computer for easy setup and software update downloads. Other remotes support macros, basically allowing you to program a series of commands to be sent to your entertainment center with the press of one button. You can then have a single button activate everything you need to watch a movie: power on the television and DVD player, select the appropriate video source on the TV and press "play" on the DVD player.

Many people are well acquainted with the home theater "universal" remote that controls your television, DVD player, and A/V tuner. With ever-advancing technology, today's remotes can control more than just your home entertainment system. Modern-day remote controls leverage technologies, such as INSTEON and Z-Wave, to can control your entire home -- from whole-home lighting control to security systems. Before long, a single remote control could control every single electronic device in your life.