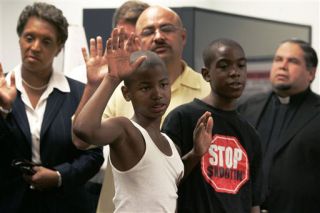 You probably missed it, but the Student Pledge Against Gun Violence was observed in schools across the country late last month. Since 1996, more than 10 million students have signed the pledge, promising not to take guns to school or use them to resolve disputes.

Most kids already know they shouldn't do this, of course, and it doesn't hurt to remind them.

But has it done any good?

Do students who take the pledge actually follow up? Do schools where the pledge has been introduced have less gun violence than schools that have not seen the pledge? Mary Lewis Grow, founder and national director of the pledge, admits that there are no studies that answer these questions.

Though the effectiveness of the pledge remains unproven after a decade, Grow defends it as a useful tool: "What the Pledge has most assuredly done is raise a lot of awareness."

Raising awareness of social problems is certainly a worthy goal, but using a pledge as a vehicle for that goal is a fool's errand. Research has consistently shown that pledges simply do not work.

Among teens who pledged abstinence or virginity until marriage, for example, one study found that almost 90 percent of them broke their vow, and those teens had the same rate of sexually transmitted diseases as non-pledgers.

A 2006 Harvard study found that more than half of adolescents who make such signed, public promises give up on their pledges within one year.

Even more tellingly, three quarters of whose who took the pledge and had sex anyway later denied having made the pledge in the first place!

America Online launched a high-profile (but now long-forgotten) pledge to stop violence in 1999. It created an "AOL.com PACT (Parents and Children Together) to Stop Violence" pledge. It offered three sets of pledges, one each for adults, teenagers, and kids (sample pledge: "I understand that violence is real and has permanent consequences; I will look for ways to settle disagreements without violence.")

As of April 2001, 272,565 people had signed, including Britney Spears, then-senator John Ashcroft, the band Hootie and the Blowfish, and AOL chairman Steve Case. It made news for a while as droves of schoolchildren made the pledge.

Then the novelty wore off and it became yet another cosmetic quick-fix.

There's no evidence that Britney Spears, John Ashcroft, or the hundreds of thousands of schoolchildren who signed the pledge took it to heart. It was simple and easy to sign, and just as easy to forget.

The AOL PACT, like most such pledges, fizzled out. The Web site and movement are now defunct. The pledge that was going to bring peace to America's schools has long been forgotten, replaced by a steady stream of yet more new pledges which will in turn fizzle out, and the cycle begins anew. The efforts come and go, but the problems remain, because pledges do not work.

Pointing out the ineffectiveness of well-intentioned pledges is not a cynical exercise. We can't fix global warming by having schoolchildren draw pictures of icebergs, and we can't address gun violence by asking teens to sign a pledge against guns.

Issues such as violence and teen pregnancy are important and complex problems that cannot be solved by feel-good, pretend solutions. Science is about testing different theories and finding out which are valid, which work. Awareness-raising is fine, but America needs science- and evidence-based public policy, measures that have been proven to work.

Benjamin Radford is LiveScience's Bad Science columnist. His books and films can be found on his website.