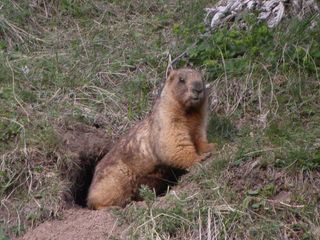 Chinese authorities have lifted a nine-day quarantine on a town in the country’s northwest that saw a resident die of the plague. The victim is thought to have caught the disease from a dead marmot, which he fed to his dog. Shocking though this might sound, plague did not die out with the Black Death of the Middle Ages for which it is most famous.

Plague, caused by a bacteria called Yersinia pestis is primarily a pathogen of rodents, in particular rats. It spreads between animals through biting fleas (which the rats carry). When the host rat dies from the plague, the fleas then seek out a new host. Occasionally the bacteria can be transmitted to other animals – including marmots – as well as to humans. The wiping out of large numbers of rodents has often preceded outbreaks of human infection.

Plague has shaped human civilisation through three major global outbreaks. It is estimated that the notorious 14th century pandemic, known as the Black Death (1347-1351) killed over half of the world’s population, 30–50% of the European population, and reduced England’s population by 1.4 million, leaving approximately 2.8 million survivors in only a five-year period. Plague was present in Europe and around the Mediterranean every year between 1346 and 1671. An outbreak between 1479–80 killed up to 1 in 5 people in England and outbreaks occurred periodically until the Great Fire of London in 1666.

Plague symptoms depend on how the bacteria has been transmitted. A flea bite gives rise to the “Bubonic” form, with the swollen black “bubos” or enlarged lymph nodes near the bite site. Gangrene of the fingers, toes, lips and nose is another common symptom. Symptoms appear suddenly, usually two to five days after exposure to the bacteria and can include vomiting of blood and extreme pain, caused by decay of the skin while the patient is still alive.

Pneumonic plague develops when the bacteria reaches the lungs. It is contagious – so if someone has pneumonic plague and coughs or sneezes, droplets containing plague bacteria can be inhaled by others nearby. Initially symptoms are fairly general with headaches, weakness and coughing, but death rapidly follows in as little as 24 hours.

The pneumonic form of the disease is always fatal if left untreated. This foregone conclusion of rapidly succumbing to the bacteria after catching it has resulted in Y. pestis being categorised as an agent of biowarfare.

Many people think of plague as a disease of the past. In fact, plague is still endemic in several areas around the globe today, including the western United States, South-East Asia and southern Africa. Every few months there are suspected new cases or outbreaks in humans. Between 1964 and 2003, over 80,000 human cases and 6,500 deaths have been documented by the World Health Organisation.

But human infection is rare and treatment is available. Speedy treatment is vital – as infection can kill very quickly – with antibiotics, such as Streptomycin and Chloramphenicol, able to do the job of curing patients.

The Chinese authorities' decision to quarantine 151 people in the local hospital was therefore appropriate. All had come into close contact with the infected man so it was important to monitor them for symptoms and ensure quick treatment. The incubation time for pneumonic plague is anything from two hours up to four days, with death in one to six days, so this fits in with the time this village was quarantined.

Recently, however, multiple drug resistant strains of plague have been reported. Misdiagnosis and lack of treatment still lead to deaths. In addition, a vaccine is available but it is only generally given to people working in affected areas that are likely to be exposed – and its efficacy has been questioned.

The recent case in China shows how incidences of the plague can be handled today to prevent something anywhere near as severe as the Black Death from happening again. With early identification it can be treated and areas put into quarantine to prevent it from spreading. But the growth of drug-resistant strains adds further ammunition to the need for better surveillance to develop new antibiotics.