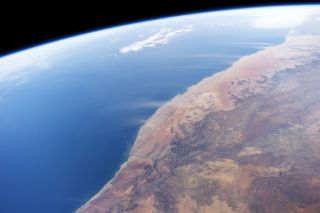 Hot winds send dust streaking out to sea in a new astronaut photograph of Namibia's coast.

These dust plumes are created by mountain, or berg, winds, according to NASA's Earth Observatory. Much like the Santa Ana winds in California, these winds flow from inland mountains. When air hits the mountain ranges, it rises and drops its moisture on the inland side of the slopes. After cresting, the now-dry air rushes downhill and encounters increasing atmospheric pressure, which causes it to contract — and in the process, heat up.

This phenomenon is the reason for the "rain shadow" on the downwind, or lee, side of mountains, where the lee slope is much drier than the windward side. Berg winds are also known as Foehn winds or "snow-eaters," the latter because they melt snow on the lee side of mountains so rapidly.

Foehn winds can fuel wildfires, particularly when they are strong. The berg winds of southern Africa can gust up to 62 mph (100 km/h), as can the Santa Ana winds of California.

This astronaut image was snapped on June 21. Visible below the line of dust plumes, the Orange River can be seen flowing into the Atlantic Ocean. The river marks the border between Namibia and South Africa. Up the coast, a huge sandy expanse is the Namib Desert sand sea, a UNESCO World Heritage Site. This sand field covers more than 3 million hectares, and is frequently bathed in fog, the main source of water for the dune ecosystem.