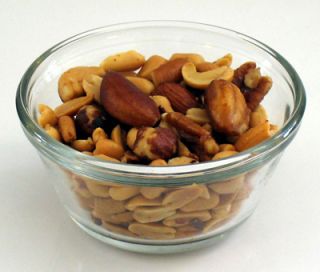 Though you might think of it as just another nut in the trail mix, the cashew is a decidedly strange snack. Sprouting like a tail from the bottom of an oddly-shaped fruit, the cashew, in its natural state, is both very weird-looking and very poisonous.

While many of the cashews produced for commerce come from Africa and India, the cashew tree (Anacardium occidentale) is native to tropical regions of Brazil. The tree produces a long, fleshy stalk, called a cashew apple, which resembles a small pear. At the end of this stalk grows the kidney-shaped cashew nut that many know and love.

Cashew nuts are protected from hungry passerby by a double shell containing a potent poison called anacardic acid. This oily substance— closely related to urshiol, the toxic compound found in poison ivy, poison oak and poison sumac— acts as an irritant, causing an allergic rash on the skin. Its corrosive coating is the reason that cashew nuts are not sold in their shells like pistachios or peanuts. Instead, cashews are typically dried and roasted, a process that rids the nut of toxic oils and leaves its shell brittle and easy to remove.

However, cashews that have not been dried and roasted can be purchased in some stores and online. But as Deborah Enos, a certified nutritionist and health coach explains in her column for Live Science, people should use caution when purchasing any cashews labeled as "raw." Though these nuts are most likely steamed or otherwise processed, Enos said that those with a severe allergy to urshiol (i.e. poison ivy) may not want to risk finding out whether these processes for removing anarcardic acid are entirely effective.

Despite its propensity to poison, the cashew is lauded for its substantial store of nutrients. Along with Brazil nuts and almonds, cashews have the highest magnesium content per serving of any tree nut. And like most nuts, cashews are also a good source of vitamin E and cancer-fighting phytochemicals. [See also: Top 10 Cancer-Fighting Foods]

And in addition to the cashew's known nutritional benefits, researchers have also explored the possibility of using the toxic oil found in the nut's shell as an antibiotic. One study by researchers at University of California Berkeley found that anarcardic acid is effective at killing the bacteria that causes acne, as well as that which causes tooth decay and the erosion of tooth enamel.

According to the researchers, using cashew oil isn't an entirely new idea, as the acid was used at one time in Brazil to treat leprosy. Cashew nut oil, as well as the leaves and bark of the cashew tree, have also been used in traditional medicines in communities around the world to treat everything from toothaches to diabetes.