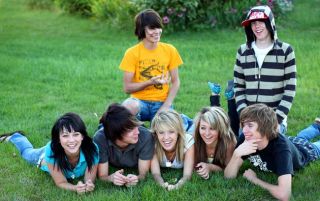 When teen girls are uncertain about possible dating abuse, they look to their circle of friends for confirmation.
(Image: © dreamstime.com)

Teenage girls who stick close with their circle of friends are less likely to take abuse from the boys they date, a new study suggests.

The intricacies of the teen years include more than the physical sprouting and associated zits. Teenagers begin to define their sense of self as individuals while forming friendships and potentially romantic relationships.

The new research, published in the Sept. 20 issue of the journal BMC Nursing, sheds light on the teen-dating scene and finds that a close-knit circle of same-sex friends provides structure for teenage girls as they navigate the dating course. The maintenance of a strong friendship circle reduces a teen girl's uncertainty about abuse, and in turn protects her from it.

In this study, teens defined abuse, whether physical, verbal, or emotional, as an act in which a boyfriend intended to hurt a girl. Each year, one in 11 adolescents reports being a victim of physical dating abuse, according to the Centers for Disease Control and Prevention. That could be an underestimate as past research has shown teen girls often falsely deny being in a violent or abusive relationship.

For the new study, Sharyl Toscano, a family nurse practitioner and assistant professor of nursing at the University of Vermont, interviewed 22 girls aged 15 to 18 from two Massachusetts high schools. The teenagers answered questions about their own dating experiences, those of friends, the influences on those relationships and any experiences of abuse.

The results revealed seven stages in the dating cycle, including:

The level of intimacy and length of time spent in each stage varied among the participants. Teens reported a strong desire to have a boyfriend, enough so that during the early stages, they weren't choosy about this significant other. As the relationship progressed, they said intimacy, both physical and emotional, were important.

During the early stages, teens also got "healthy dating" practice.

"In the early stages of dating, the entire group (circle) will go out to the movies or some other activity together," Toscano told LiveScience. "During these outings, the teens develop essential skills of dating, including but not limited to warding off unwanted sexual advances."

Keeping ties with a circle of friends can reduce the likelihood of dating abuse, Toscano found, because if a teen is uncertain about abuse, she can turn to the group for a reality check and, if needed, protection from further harm.

Overall, this circle sets the social rules and norms for the dating relationship, acting as a safety net against anyone not abiding by the set rules. Outside of group guidance, teen girls could see physical abuse as play fighting, control as protection and sexual pressure (even rape) as normal sexual tension, Toscano said.

One participant reported cutting herself off from her friends because they didn't like her boyfriend, and when abuse did occur she hid it.

Other factors also contributed to the likelihood of dating abuse. Teen girls were more likely to tolerate abuse if they feared losing the guys, had lost their virginity to them or were sexually involved with them.

The teens reported that "intent to hurt" was the defining factor as to whether an act constituted abuse of any kind.

Emotional abuse was the most common form of abuse reported. Typically, the emotionally abusive partner would try to isolate the couple from the circle of friends. Once "intimacy" was established, the abuser would further control his girlfriend with suicidal threats, Toscano said.

The teens had a tough time defining sexual abuse and reported that once they had succumbed to sexual pressure, they didn't feel justified in refusing the second time. One student explained how sex makes it more likely that a girl will stay in an abusive relationship, saying, "When you finally open up to someone and you get so close to them, it just doesn't matter if they treat you like crap."