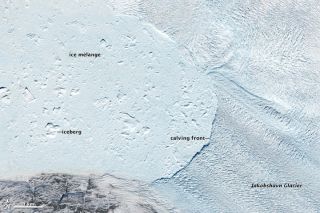 Greenland's Jakobshavn glacier recently made headlines for its record-breakingly fast flow. Now, a new satellite image provides a visual of this process.

In a comparison between two images of the glacier, one taken May 9 and the other June 1, the loss of kilometers of ice from the calving front of the glacier is visible. The change is so significant that the after image almost looks like it has been "zoomed out" to make the glacier look smaller. But the views are the same. The missing ice simply slipped into the sea.

The Jakobshavn glacier is one of Greenland's most prominent. It drains some 6.5 percent of the Greenland ice sheet area into the Ilulissat Icefjord in western Greenland, according to NASA. Researchers believe this glacier produced the iceberg that wrecked the Titanic. [Gallery: Greenland's Melting Glaciers]

In February, a study in the journal The Cryosphere found that the Jakobshavn conveyer belt that moves ice from the ice sheet to the ocean is churning faster than ever. In the summer of 2012, the study found, the glacier moved 151 feet (46 meters) per day, or the equivalent of more than 10.5 miles (17 kilometers) a year.

"We are now seeing summer speeds more than four times what they were in the 1990s on a glacier, which at that time was believed to be one of the fastest, if not the fastest, glacier in Greenland," study researcher Ian Joughin of the University of Washington Polar Science Center said in a statement at the time.

Between 2000 and 2010, the Jakobshavn glacier's shed ice raised sea levels by 0.04 inches (1 millimeter), Joughin added, an impressive feat for a single glacier. As the glacier flows and thins, its calving front — where ice meets sea — is retreating, meaning that the glacier now drops ice farther inland than it used to. In 2012 and 2013, Joughin and his colleagues found that the calving front retreated 0.6 miles (1 km) inland compared with previous summers.

This sort of retreat is visible in these satellite images, both taken by NASA's Landsat 8 and released by NASA's Earth Observatory. The striated, almost scaly ice of the glacier is seen on the right of the photographs. To the left, a frothy-looking icy mélange floats in the fjord. The chunks in this mélange are large icebergs. In the few weeks between the two views, a massive amount of ice has calved off the glacier.

Though this calving event was not caught on camera, others at the Jakobshavn glacier have been. In 2008, the Extreme Ice Survey team, led by photographer James Balog, captured a calving event on film that lasted some 75 minutes. Two videographers camped out for weeks waiting to see Jakobshavn drop ice. They were rewarded with the largest calving ever caught on film — and a view of a chunk of ice as wide as Manhattan falling into the fjord. The footage can be seen in the 2012 documentary "Chasing Ice."

Meanwhile, the rest of Greenland is seeing massive ice loss as well. In March, researchers reported that the northeast Greenland ice sheet, long thought to be relatively protected from warming, has lost more than 10 billion tons of ice each year since 2003.