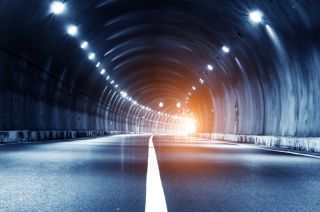 In many regions of the United States, breath holding is popular when driving through tunnels, the practice associated with good luck or a wish coming true.
(Image: © hxdyl | Shutterstock)

A man fainted while holding his breath as he drove through a tunnel near Portland, Oregon, causing a head-on collision that sent four people to the hospital, possibly highlighting the ill effects of even common, and seemingly silly, superstitions.

At the end of May, the driver, Daniel Calhon, lost consciousness and swerved his car into oncoming traffic. Calhon, his passenger and two others sustained non-life-threatening injuries; occupants in a third vehicle involved suffered no injuries. Calhon was cited for reckless driving, reckless endangerment and assault, CBS News reported.

The man has not explained why he held his breath while driving through the tunnel, but police suggested that it was done as part of a superstitious ritual. In many regions of the United States, breath holding is popular when driving through tunnels, the practice associated with good luck or a wish coming true. CarMax, the auto sales giant, sent out an April 25, 2014 tweet informing customers that "Holding your breath while driving though a tunnel is our favorite driving superstition." Other common travel superstitions include holding your breath while passing by a graveyard (lest you accidentally inhale a lost soul) and stepping onto a train or ship with the right foot first. [The Surprising Origins of 9 Common Superstitions]

"A Dictionary of Superstitions" (Oxford University Press, 2005), edited by Iona Opie and Moira Tatem, states, "An old superstition is if you speak under a tunnel or bridge you must touch a green object or you will get bad luck. It is still believed now." There are many regional variations of such legends with elements added or dropped from the story; in modern times, successfully holding one's breath throughout a (hopefully brief) tunnel journey may substitute for touching a green object, for example.

Travel superstitions have ancient roots. As folklorist Claudia de Lys writes in her "Giant Book of Superstitions" (Lyle Stuart, 1979), "Modern travelling superstitions, such as not wanting to leave the ground, not sleeping in an upper berth and sitting backwards on a train, are in essence not far removed from the inexplicable forebodings which assailed early and ancient man when faced with a journey. These strange premonitions [stem] from a sense of insecurity, when no apparent danger exists."

A more recent survey, this one by Harris Interactive, polled Americans in January about their beliefs in individual superstitions, finding 21 percent of Americans believe knocking on wood prevents bad luck, 20 percent think walking under a ladder is unlucky, 14 percent believe opening an umbrella indoors brings bad luck and 12 percent think the number 13 is unlucky. Some 14 percent of participants said they believe Friday the 13th is an unlucky day.

Superstitions, of course, don't need to be true to be widely believed; if a lucky penny or rabbit's foot truly assured good luck or victory over adversity, every gambler, investor and athlete would be fully stocked with such totems. Though superstitions are often harmless (there's no danger in carrying a lucky penny or knocking on wood after saying something hopeful), under some circumstances, they can carry a very real threat.

Benjamin Radford, M.Ed., is deputy editor of "Skeptical Inquirer" science magazine and author of seven books including "Mysterious New Mexico: Miracles, Magic and Monsters in the Land of Enchantment" (University of New Mexico Press, 2014). His Web site is www.BenjaminRadford.com.