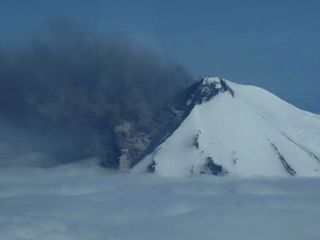 Alaska's Pavlof volcano turned up the volume on its new eruption yesterday (June 2), sending up a billowy ash plume that could threaten local flights, according to the Alaska Volcano Observatory (AVO).

The AVO tracks eruptions at Pavlof, a snowy cone on the Alaska Peninsula, using satellite imagery and earthquake monitors. The most recent eruption started Saturday, when heat-tracking by satellite shows a rise in surface temperatures at the volcano. NASA's Landsat satellite also snapped lava streaming from the volcano's peak.

Pilots flying to nearby villages also called in reports to the AVO, and yesterday, local aviators said the volcano's ash column had reached 22,000 feet (6,700 meters). When Pavlof erupted in May 2013, ash fall forced regional airlines to cancel flights to communities such as Cold Bay, Sand Point and King Cove, the AVO reports. No flights have been reported canceled this week.

On the opposite side of the Pacific Ocean, geologists are also monitoring the ongoing eruption at Indonesia's Sangeang Api volcano. The volcano awoke with a spectacular blast on May 30. A NASA satellite image shows a thick plume of ash and volcanic gas drifting southeast. The airport in Bima, Indonesia, remains closed because of the glassy particles, which can destroy jet engines, NASA's Earth Observatory reports.