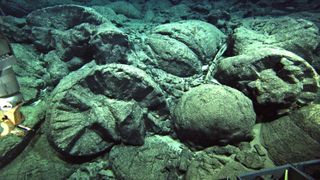 Pillow lavas at Ka'ena volcano, a type of lava that only forms underwater.
(Image: © University of Hawaii at Manoa)

The discovery means Oahu once towered above the ocean with three volcanic peaks, the researchers said. Until now, scientists thought Oahu was built by two volcanoes — Wai'anae on the west and Ko'olau on the east.

"I think we may very well have had three active volcanoes in the Oahu region," said lead study author John Sinton, a geologist at the University of Hawaii at Manoa.

The new volcano, named Ka'ena, was born in the deep underwater channel south of Kauai about 5 million years ago, according to the study, published May 2 in the Geological Society of America Bulletin. Sometime later, Wai'anae rose on Ka'ena's flanks and therefore breached the sea first, breaking through the waves 3.9 million years ago. The researchers think Ko'olau surfaced after that, about 3 million years ago. [See Photos of the Newfound Underwater Volcano]

Ka'ena volcano is about 2.5 miles (4 kilometers) high, but only reached about 3,000 feet above sea level, Sinton said. As Oahu's first-born, Ka'ena is the shortest of the three volcanoes because it had to grow farthest from the seafloor to the ocean surface. But the researchers know Ka'ena was once an island peak, because the underwater mountain is capped by lavas with textures that only form in air. With a remotely operated vehicle, the researchers also spied a sandy beach strewn with shark teeth.

Oahu's volcanoes died out about 2 million years ago, and like all of Hawaii's islands, their massive bulk is slowly sinking, hiding Ka'ena beneath the sea.

The weight of the Hawaiian volcanoes has pressed down the Earth's crust. The flexing resembles a person standing on a trampoline, causing the springy surface to sag.

"The first ones, because they form in deep water, they kind of escape notice," Sinton said. "We like to think we know how many Hawaiian volcanoes there are, but what we know about what's underwater is a huge area of ignorance," he told Live Science's Our Amazing Planet.

Though scientists have noted Ka'ena volcano's massive underwater bulk for decades, it took several underwater expeditions to confirm geologists' suspicions that it was separate from Wai'anae.

Long, shallow ridges (Ka'ena Ridge and Wai'anaa) that stretch to the northwest mark the topography offshore of Oahu. When the U.S. Navy mapped the seafloor during World War II, scientists thought the ridges were extensions of Wai'anae volcano.

"Once better maps started to appear, the idea that there might be an earlier volcano came to our minds," Sinton said. "It was obvious this was something unusual."

Sinton and his colleagues distinguished the volcanoes with analysis of rock samples and detailed mapping of the seafloor's bumps and saddles. The lava at each volcano is chemically distinct, with different ages; gravity surveys suggest the different groups of lava had unique sources.

The new volcano fills a puzzling gap between Oahu and its nearest neighbor, the island of Kauai. Except for these two islands, volcanoes in the Hawaiian chain are spaced within 20 to 40 miles (32 to 64 kilometers) of their older neighbor. But Wai'anae volcano was 90 miles (145 km) from Kauai. Ka'ena volcano fixes the chain's missing link.

The Hawaiian Islands are hotspot volcanoes, a chain formed as the Pacific plate moves over a plume of hot magma in the Earth's mantle. As the plate shifts, new volcanoes appear.

But there's one mystery Ka'ena volcano can't solve. Despite an intense search, the research team never found the source of an enigmatic underwater eruption in 1956 offshore of Oahu, Sinton said. However, the scientists did find young lava fields that erupted as recently as 300,000 to 400,000 years ago on the south side of Ka'ena Ridge.

The lava fields show eruptions are possible near the region of the mysterious 1956 event, the study concludes. "The best I can say is it's unconfirmed," Sinton said.