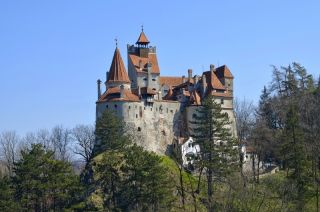 The 13th-century fortress in Transylvania called Bran Castle, and often referred to as Dracula's Castle, is up for sale by its owners — the Habsburg royal line — and the Romanian government has apparently placed an $80 million bid on the storied mansion, according to news reports.

Though the legendary vampire himself never stepped foot in this castle — he is fictional, of course — apparently images of it reached Bram Stoker, who penned the 1897 novel "Dracula."

According to statements on the Bran Castle website: "Bram Stoker never visited Romania. He depicted the imaginary Dracula's castle based upon a description of Bran Castle that was available to him in turn-of-the-century Britain. Indeed, the imaginary depiction of Dracula's Castle from the etching in the first edition of 'Dracula' is strikingly similar to Bran Castle and no other in all of Romania." [The Real Dracula: Vlad the Impaler]

And in the novel, Stoker describes the Transylvanian Count's fortress as sitting high above a valley, perched on a rock above a flowing river. As the Bran Castle website notes, this castle is the only such fortress in Transylvania that fits the bill.

When creating the monstrous character, Stoker drew inspiration from a real-life man with an apparent taste for blood: Vlad III, Prince of Wallachia (modern-day Romania), also called Vlad the Impaler (Vlad Tepes); the prince seemed to have a fondness for impaling his enemies.

Vlad III was born in 1431 in Transylvania, a mountainous region in modern-day Romania; his father, Vlad II Dracul, ruled Wallachia, a principality south of Transylvania. After his induction into the Order of the Dragon, a Christian military order supported by the Holy Roman Emperor, Vlad II was given the surname Dracul ("dragon").

Read more about the sale of Dracula's castle.