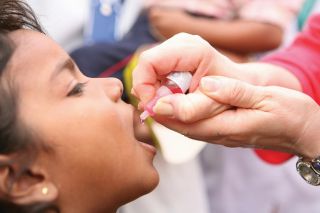 Polio, the devastating disease that had been nearly vanquished due to widespread public health efforts to vaccinate children in recent decades, is now spreading to countries that had been polio-free.

The re-emergence of polio is not a surprise to experts, because although the disease has been brought under control in most countries, the presence of the disease in some regions is enough to pose a threat to the rest of the world.

"We haven't eradicated polio from Pakistan, Afghanistan and Nigeria," said Dr. Paul Offit, chief of the Division of Infectious Diseases at the Children's Hospital of Philadelphia. "So, the virus continues to reproduce itself in the intestines of those children and to be spread from one person to the next." [7 Devastating Infectious Diseases]

So far in 2014, despite the fact that the early part of the year is the low transmission season, people in 10 countries have been infected with polio.

This week, the World Health Organization said the spread of polio so far in 2014 stands in stark contrast to the disease's prevalence during the same period last year. The current situation is an "extraordinary event" and a global public health threat, the WHO said in a statement.

Polio, short for poliomyelitis, is a highly contagious and incurable viral infection of the nervous system, which can be prevented by vaccination. Although some infected people recover completely, the virus causes lifelong paralysis in about one in 200 cases, and about 5 to 10 percent of these patients die when their breathing muscles become paralyzed.

Unlike diseases such as measles or smallpox, people infected with polio may not show any symptoms, or may show only mild symptoms, so they may not even realize they are infected even though they are transmitting the virus to other people, Offit said.

"Polio can be asymptomatic, so when you see paralysis, it's really the tip of the iceberg," Offit said.

In the 1980s, the polio virus killed or paralyzed about 350,000 people worldwide each year, but now this number has been greatly reduced, with 407 cases reported in 2013, according to the Centers for Disease Control and Prevention.

The United States was declared polio-free in 1979, meaning there were no reported cases in the previous three years. India — one of the countries where the eradication of polio has been the most challenging — along with 10 other Asian countries, were declared polio-free just recently, in March 2014, according to the CDC.

However, the spread of polio has never stopped in Afghanistan, Nigeria and Pakistan, and the spread of infection in those countries poses a threat to any region whose ongoing immunization services are interrupted.

In October 2013, an outbreak of polio occurred in Syria for the first time in 14 years, due to the interruption of public health services resulting from the country's civil war, the WHO reported last year.

The virus has now been reintroduced and continues to spread in the Horn of Africa, Cameroon and Syria, according to the CDC.

"As a general rule, when the herd immunity breaks down, what you see happening is that the most contagious diseases come back first — which is what's happening in our country [the United States] when parents choose not to vaccinate their children," Offit said. "You see measles, which is highly contagious, come back; you see mumps or whooping cough."

The Syrian polio outbreak, along with other outbreaks in previously polio-free countries, shows any interruption in immunization can make a country vulnerable to any polio circulating in the region or imported from the remaining countries where the virus has not been eradicated.

In fact, the disease might reach European countries that have vaccination rates lower than 90 percent, which is the level recommended by the WHO, experts warned in a recent study published in the The New England Journal of Medicine.

According to the WHO, the consequences of a global spread of polio could be particularly acute today, given the large number of countries that are torn by conflict and regions that have weak public health services.

"We live in a world with international travel. It's possible that someone who is asymptomatically infected travels, and could spread it to a pocket of children who are not immunized," Offit said. "Until we eliminate the virus in these countries, there's always the risk it would spread to other countries."