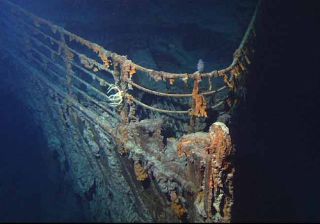 The bow of Titanic photographed in June 2004, by the ROV Hercules during an expedition returning to the shipwreck of the Titanic.
(Image: © NOAA / Institute for Exploration/University of Rhode Island)

Congress will soon consider legislation that could protect the Titanic, which tragically sunk in the North Atlantic 95 years ago, from unregulated salvage and other activities that could harm the remains of the once great ship.

The Department of State sent the bill to Congress yesterday.

The RMS Titanic was a British passenger superliner that sunk on its maiden voyage after colliding with an iceberg on April 14, 1912. About 1,500 people died as a result, making the sinking one of the worst peacetime maritime disasters in history.

Some scientists are concerned that visits to the wreck and the recovery of artifacts from the ship are hastening its decay.

If enacted, this legislation will implement the agreement called for by Congress in the RMS Titanic Maritime Memorial Act of 1986 (Titanic Memorial Act), and will allow the United States to work in concert with the United Kingdom, Canada and France to more effectively protect the ship and its wreck site.

The agreement would designate the Titanic shipwreck, which sits 12,000 feet below sea level, as an international maritime memorial to those who lost their lives in the sinking.