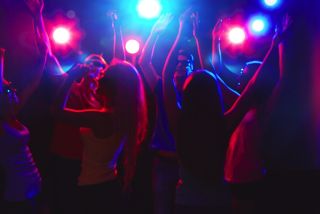 (Image: © Young people having fun dancing at party. via Shutterstock)

Ecstasy users have claimed that the drug makes them feel more social, and now this prosocial effect is supported by science.

People who took ecstasy were also less likely to rate pictures without social content as pleasant than those who received a placebo, the researchers said.

"People who use it recreationally claim that it makes them feel more social, more interested in interacting with other people, more connected with other people," said study author Harriet de Wit, a professor at the University of Chicago's Department of Psychiatry and Behavioral Neuroscience.

The new study "is a controlled demonstration that this drug seems to make people more reactive to positive social stimuli, like, for example, other people," de Wit told Live Science.

In the study, 101 participants between ages 18 and 35 were told that they were receiving a tranquilizer, a stimulant (such as ecstasy), a sedative, a hallucinogen (such as LSD), a cannabinoid (such as marijuana) or a placebo, but in reality they were all given either ecstasy or a placebo.

The researchers then showed the participants pictures that depicted social scenes — such as two people talking — and pictures without people in them, like slices of pizza.

In another experiment, the researchers showed the participants pictures of different facial expressions and took a look at whether people under the influence of ecstasy could detect different emotions. [5 Ways Your Emotions Influence Your World (and Vice Versa)]

"It turns out they are not as good at detecting negative emotions," for instance anger or fear, de Wit said.

This suggests that one way the drug makes people more social is by making them less sensitive to negative expressions on the faces of other people, she said. In other words, people on ecstasy are more likely to interact with people even if they are exhibiting negative facial expressions.

Other research has also shown that ecstasy reduces the perception of simulated social rejection.

Ecstasy use had been known to promote the secretion of oxytocin, a hormone that makes people feel connected to each other, de Wit said. So it may be the case that the increased sociability is related to the oxytocin release, but the researchers did not demonstrate the relationship between the two in the study, de Wit said.

The study was published online March 27 in the journal Social Cognitive and Affective Neuroscience.