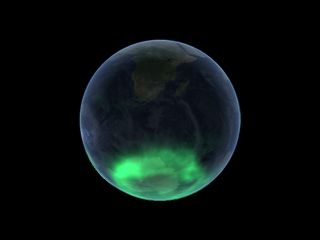 A view of the aurora australis as taken by the Imager for Magnetopause-to-Aurora Global Exploration (IMAGE) spacecraft on Jan. 7, 2005.
(Image: © NASA)

The aurora is more than just a breathtaking display of light. It may also hold the secret of a magnetic phenomenon related to the nuclear fusion powering the sun. This secret could even help create nuclear fusion in the lab, says a team of researchers.

Nuclear fusion is a reaction that combines the nuclei of two atoms into one. The process powers stars, but getting a self-sustained fusion reaction going on Earth is very difficult, and has so far eluded scientists. For example, in February, researchers at the Lawrence Livermore Laboratory in California made headlines when they managed to spur a fusion reaction that ate up less fuel than it produced. But the overall process of triggering the reaction still took more energy than was generated.

Now a team of researchers from the University of Michigan and Princeton University hopes that the performance of fusion experiments can be improved by investigating of the dynamics of magnetic fields observed during the aurora. [Video: The Need for Fusion Energy]

To trigger a fusion reaction on Earth, one must compress the fuel (typically equal mixtures of deuterium and tritium, which are two isotopes of the hydrogen atom) to a temperature and density similar to that at the core of a star. If the hydrogen fuel is held long enough under these very specific conditions, the superheated gas turns into a "soup" of freely moving, charged particles called plasma. In this state, the hydrogen starts fusing into energetic helium. That’s how young stars burn, using hydrogen compressed by the stars' own gravity. As fusion devices become bigger and the plasma in them gets hotter and more compressed, there is hope to one day reach "ignition" — the point at which the plasma heats itself without external input.

Another galactic process might help usher along the quest for Earth-bound fusion. As the sun's plasma swirls around, the substance generates a strong magnetic field. Sometimes, this field is so highly stressed that its field lines are forced together, at which point the Sun releases a huge amount of energy into space, known as a solar flare. At times, the flare explodes straight in the direction of Earth, sending a stream of highly charged solar particles to the planet.

When the solar particles approach Earth, they distort its magnetic field, which allows some charged particles to enter the atmosphere at the North and South Poles. As the particles interact with gases in the Earth's atmosphere, those gases begin to glow. In the north, this is known as aurora borealis, or the Northern Lights. The Southern Lights, seen in the Southern Hemisphere, are called aurora australis. [Gallery: Images of Gorgeous Auroras]

If this solar wind is especially strong, it can cause the planet's magnetic field lines to disconnect from Earth. Then, after moving about a third of the way from the Earth to the moon, these lines reconnect and snap back into position. In the process, they sling charged solar particles toward the Earth's atmosphere, triggering the aurora. This breaking and reconnecting of oppositely directed magnetic field lines is called magnetic reconnection. Incidentally, scientists also believe that magnetic reconnection powers the solar flares themselves.

With the aurora borealis, for example, the northern lights usually occur near the North Pole, but the more the magnetic field lines disconnect and snap back, the further south the lights can appear.

However, magnetic reconnection also happens on a much smaller scale during nuclear fusion in the lab. And it is this process that could help make nuclear fusion energy-efficient, researchers reported on March 14 in the journal Physical Review Letters.

To trigger fusion on Earth, scientists compress a pellet of hydrogen isotopes with the help of powerful lasers, until the fuel reaches a similar density and temperature as that inside a star.

The problem, though, is that directing a laser at a fuel pellet does not compress it uniformly at all; instead, the pellet gets deformed.

"It's very difficult to squeeze the pellet down uniformly. It just doesn't compress down to a nice, smooth sphere," said Alexander Thomas of the University of Michigan, who is a co-author on the new paper. "And if it isn't smooth and uniform, it won't achieve the sufficient temperature and density to get the fuel to burn completely, and you'll end up putting much more laser energy in than the amount of fusion energy you get out."

To deal with this problem, modern fusion facilities place the pellet inside a metal canister. The laser beams are intended to heat the inner walls of the canister, triggering an intense shower of X-rays that is meant to heat the pellet uniformly.

In theory, this should compress the fuel into a smooth, uniform sphere. But it doesn't work, said Thomas.

"It happens for a variety of reasons, including because the lasers also generate very strong magnetic fields — around 100 Tesla — on the inner surface of the canister. They act like a barrier, stopping the heat from spreading uniformly," said Thomas. (The Tesla is a measurement of magnetic field strength.) "It's as if each laser were producing a 'spot' on the cavity, making the final temperature distribution 'spotty' and the pellet being squeezed into a blob, not a nice sphere."

Thomas and his colleagues now suggest that the key to applying heat uniformly might be magnetic reconnection.

"Around each laser 'spot' on the canister, there are self-generated, spontaneous magnetic fields in the plasma, and our plan is to get these fields to snap away and then reconnect," said Thomas. [Twisted Physics: 7 Mind-Blowing Findings]

Breaking and reconnecting the magnetic fields would change the shape of the plasma and redirect the flow of electrons carrying the thermal energy, spreading heat more uniformly.

The scientists used a computer to simulate the magnetic reconnection process in the plasma at two neighboring laser hotspots.

The simulations showed that "the magnetic fields can be pushed around by flows of heat, and reconnection of the fields can be driven by these flows," said Will Fox, one of the study researchers from the Princeton Plasma Physics Laboratory.

At the moment, the researchers still don't know precisely how to make this reconnection most efficient, because "we are at such an early stage of understanding [the process]. And the study was not an exhaustive look at all of the variables, just a first demonstration that this process can occur," Fox told Live Science.

Scott Wilks, a plasma physicist who was not involved at the study and who works at the Lawrence Livermore National Laboratory, calls the results important.

"Depending on how overlapped the laser beams are on the wall, this theory would be a great place to start, in order to begin explaining these observed magnetic fields. Typically, people think that you want the smoothest laser beam distribution over the entire wall for the best symmetry. Many times, there are simply not enough laser beams to do this. This paper implies that there may be alternative laser beam configurations to accomplish this by exploiting magnetic reconnection," Wilks told Live Science.

There are several limitations associated with the current simulations, though, he added. These include the small system size, the modeling of times shorter than the actual experiment and the inability of the particles to move in all three dimensions in the simulation box.

"However, future computers with more memory and faster compute speeds would allow the researchers to investigate whether this effect is playing an important role in current fusion-related experiments," Wilks said.