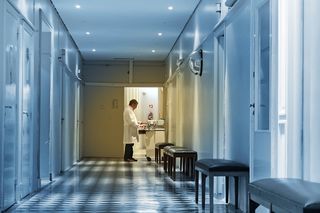 Massachusetts' near-universal health coverage has resulted in reduced death rates in the state, particularly lowering the death rates among people with diseases, such as stroke and cancer, who benefit from timely health care, a new study has found.

During the four years after Massachusetts instituted a health care overhaul in 2006, death rates in the state decreased by about 3 percent, meaning there were eight fewer deaths than expected for every 100,000 people in the state, whereas rates didn't change over that time period in similar populations in states that didn't expand health coverage.

When the researchers looked at deaths only related to conditions that are more preventable or treatable with timely care — for example, heart disease, stroke, cancer and infections — they found the death rate decreased 4.5 percent over the four-year period.

The researchers estimated the coverage expansion saved one life per year for every 830 people who gained insurance, according to the studypublished today (May 5) in the journal Annals of Internal Medicine.

"Given that Massachusetts' health reform was, in many ways, the model for the Affordable Care Act, it is critical to understand the law's potential implications for population health," said study researcher Benjamin Sommers, assistant professor of health policy and economics at Harvard School of Public Health. [7 Facts You Should Know About Health Care Reform]

The Massachusetts' health care reform provided researchers a rather unique opportunity to study the effects of health insurance on health and mortality. It's been hard to figure out whether uninsured people have higher death rates because of barriers to health care, or because they tend to be on average sicker, have lower income and engage in more risky health behaviors such as smoking than insured individuals, Sommers said.

"So here, we take advantage of this natural experiment of Massachusetts doing something very different with its health care system than any other state, and we find there are significant effects on mortality," he said.

The researchers also found that changes in mortality rates were larger in Massachusetts' counties with lower household incomes and higher percentages of uninsured people compared with wealthier counties.

Better access to health care likely reduces death by allowing people to get the care they need once they're sick, as well as preventive care and chronic disease management, the researchers said in the study.

"We found that when [the] state expanded its health insurance, it led to decreases in cross barriers to care, and people were more likely to say that they had a usual source of care or primary care provider," Sommers said. "They were more likely to have doctor visitsin the last year, and they described their health overall as being better."

Generalizing the findings from one state to a country as big and diverse as the United States may not be very straightforward, Sommers said, because, although the policies are similar, the population and political environments are very different.

"The Massachusetts reform was a bipartisan bill, it had support from a Republican governor and Democrat legislators, and a lot of stakeholders working to make it succeed," Sommers said. "Nationally, with Affordable Care Act, we know that's not the case. There are a lot of people who oppose the law, and are trying to slow it down."

For the study, the researchers analyzed the data on death rates for adults in Massachusetts' counties and similar counties in other states, and looked for changes between the four-year period before the reform (2001-2005) and the four-years period after the law was passed (2006-2010).

The study looked at people ages 20 to 64, which is the age group targeted by the reform. Data for the study came from the Centers for Disease Control and Prevention, and the U.S. Census Bureau.