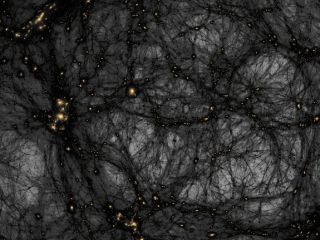 Dark matter is an invisible material that emits or absorbs no light but betrays its presence by interacting gravitationally with visible matter. This image from Dark Universe shows the distribution of dark matter in the universe, as simulated with a novel, high-resolution algorithm at the Kavli Institute of Particle Astrophysics & Cosmology at Stanford University and SLAC National Accelerator Laboratory.
(Image: © © AMNH)

Dark matter, the invisible and mysterious stuff that makes up most of the material universe, might be hiding itself in microscopic black holes, says a team of Russian astrophysicists.

No one knows what dark matter is. But scientists do know that it must exist, because there is not enough visible matter in the cosmos to account for all the gravity that binds galaxies and other large-scale structures together.

Astronomers have been on the hunt for dark matter for decades now, using detectors both on Earth and in space. The new hypothesis, formulated by astrophysicists Vyacheslav Dokuchaev and Yury Eroshenko at the Institute for Nuclear Research of the Russian Academy of Sciences in Moscow, suggests that dark matter could be made of microscopic — or quantum — "black hole atoms." [The Hunt for Dark Matter: Images and Photos]

The concept is not entirely new; others have suggested that various types of miniature black holes could make up dark matter, which is so named because it apparently neither absorbs nor emits light, and thus cannot be detected directly by telescopes.

Physicists have also long believed that microscopic black holes must have existed in the early universe, because quantum fluctuations in the density of matter just after the Big Bang would have created regions of space dense enough to allow the formation of such tiny black holes.

Some researchers believe that the universe could still be full of such "primordial black holes."

The new study by Dokuchaev and Eorshenko suggests a specific type of quantum black hole might exist: so-called black hole atoms. These microscopic black holes would originally have had an electric charge, the researchers say. This charge would have attracted protons or electrons, leaving the tiny black hole electrically neutral, just like an atom. [Images: Black Holes of the Universe]

The idea is partly based on the "friedmon theory" proposed in the 1970s by prominent Russian physicist Moisei Markov, and Valeri Frolov of the University of Alberta in Canada.

A friedmon is a mathematical solution of the Einstein field equations, which are key constituents of the theory of general relativity. To an external observer, a friedmon looks like a micro blackhole with anelectric charge the same as that of the electron.

However, the friedmon's interior can be macroscopically large — up to the size of the known universe, Frolov, who was not involved in the new study, told Space.com.

And a friedmon with an electron moving around it is similar to an atom, he added.

Markov and Frolov never made the link between the friedmon and dark matter. But Dokuchaev says that such neutral black hole atoms should have the same properties that dark matter is thought to possess.

The black holes would have about the same mass as an asteroid, from 10^14 kilograms to 10^23 kilograms, but be even smaller than atoms. Their interaction with ordinary matter would also be extremely weak — even weaker than that of neutrinos, the researchers said.

The quantum black holes would therefore be dark, massive, non-interacting particles – with properties that “"one needs for the dark matter candidates,”" write Dokuchaev and Eroshenko write in a paper published in March in the journal Advances in High Energy Physics.

But Frolov doesn't think that the idea quite works.

"Using [friedmons] for the explanation of the dark matter looks contradictory. Dark matter must be formed of WIMPs (weakly interacting massive particles), while friedmon atoms 'participate' in the electromagnetic interaction," he said.

"Possibly for this reason, Dr. Dokuchaev proposed to 'put' an electron orbit inside the friedmon. However, in this case the friedmon configuration will not be stabilized by an electric charge, and its external mass may be reduced to zero value," Frolov added. "Another unsolved problem of his model is the mechanism of the friedmon's formation. One can expect that in order to produce a sufficient number of friedmons to explain the dark matter, in the early universe there must exist large small-scale inhomogeneities. This is difficult to expect in the standard inflation models."

Other cosmologists also have doubts.

"Usually, black holes are not expected to be charged in astrophysical or cosmological environments, because they quickly get neutralized by accreting charged particles of opposite sign — electrons or protons — from their environment," said Avi Loeb, an astrophysicist at Harvard University.

But Dokuchaev is convinced that his concept is just as good as all the other dark matter theories; after all, no one has yet spotted this mysterious invisible stuff.

Black hole atoms now join a long list of candidates for dark matter particles, from supersymmetric neutralinos, WIMPs and axions to warm sterile neutrinos and many more, Dokuchaev told Space.com. Verifying whether any of them is the real deal will require catching one first, he added.

And spotting a neutral black hole atom should be possible, the Russian researchers say, because the formation of these peculiar invisible objects might produce a detectable signal.