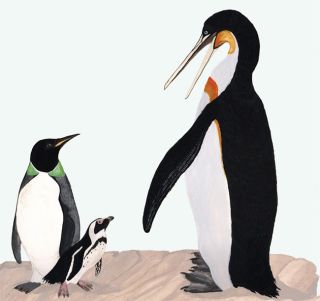 Huge and distant cousins of today’s ice-loving penguins might have basked in a warm climate along the Peruvian coast more than 30 million years ago, fossils of two extinct penguin species suggest.

One of the ancient birds sported a seven-inch beak and stood at five feet tall, which would have dwarfed even the heavyweights of today, the Emperor penguins. Currently, 17 penguin species inhabit the globe, ranging in size from the two-pound, 16-inch little blue penguin to the 84-pound, 4.3-foot Emperor penguin.

The skeletal bones and two complete skulls suggest the warm-weather penguins were deep divers and could “fly” through the water with the grace of their modern kin, scooping up fish along the way.

The findings, detailed online this week in the journal Proceedings of the National Academy of Sciences, call into question the established idea that penguins evolved in high latitudes and didn’t waddle close to the equator until about 10 million years ago—long after Earth cooled significantly.

“We tend to think of penguins as being cold-adapted species,” said lead study author Julia Clarke, a paleontologist at North Carolina State University and the North Carolina Museum of Natural Sciences. “But the new fossils date back to one of the warmest periods in the last 65 million years of Earth’s history. The evidence indicates that penguins reached low-latitude regions more than 30 million years prior to our previous estimates.”

“We had known from isolated bones and limited material an array of giant penguin species from high-latitude regions,” Clarke told LiveScience, “but none from low latitudes.”

Clarke and her colleagues studied remains from two new, extinct penguin species that had been discovered in 2005 along the southern coast of Peru. The giant penguin, Icadyptes salasi lived about 36 million years ago. The second species, Perudyptes devriesi, was 2.5 to 3 feet tall and represents one of the oldest known penguin species, living about 42 million years ago.

Unlike living penguin species, the ancient, oversized birds had long, narrow beaks, with Perudyptes having an exceptionally long and spear-like beak, which Clarke said likely helped the animal gulp down large prey and attain its towering stature.

Perudyptes had features indicating a transition from wing to paddle. For instance, the giant penguin’s wing muscles were reduced compared with flight-able birds, “which basically are part of the changes to get to a paddle-like structure--you reduce these intrinsic wing muscles,” Clarke said.

To find out how the penguins landed in low-latitude regions, the scientists examined the geographic distribution and evolutionary relationships of other extinct penguins.

The results suggest the two Peruvian species result from separate dispersals, with the ancestors of Perudyptes dwelling in Antarctica before their equator-bound trek and Icadyptes originating near New Zealand.

A picture of Peruvian penguins hanging out on the beach make some people wonder if today’s cold-adapted penguins would bask in the effects of global warming. Not so, Clarke warns.

“We are not by these findings implying that extant penguins will not be affected by current global warming. These Peruvian species are early branches off the penguin family tree, that are comparatively distant cousins of living penguins,” Clarke said. “In addition, current global warming is occurring on a significantly shorter timescale. The data from these new fossil species cannot be used to argue that warming wouldn’t negatively impact living penguins.”