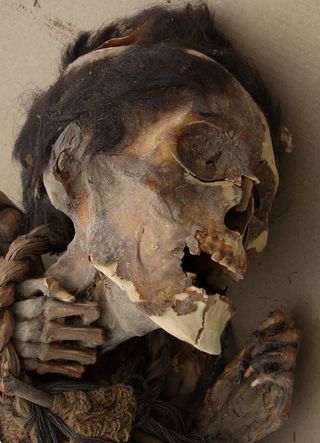 As expected, the team detected arsenic in the mummy's hair and in the soil. They also discovered skin conditions indicative of arsenic poisoning.
(Image: © Ioanna Kakoulli, UCLA)

People of numerous pre-Columbian civilizations in northern Chile, including the Incas and the Chinchorro culture, suffered from chronic arsenic poisoning due to their consumption of contaminated water, new research suggests.

Previous analyses showed high concentrations of arsenic in the hair samples of mummies from both highland and coastal cultures in the region. However, researchers weren't able to determine whether the people had ingested arsenic or if the toxic element in the soil had diffused into the mummies' hair after they were buried.

In the new study, scientists used a range of high-tech methods to analyze hair samples from a 1,000- to 1,500-year-old mummy from the Tarapacá Valley in Chile's Atacama Desert. They determined the high concentration of arsenic in the mummy's hair came from drinking arsenic-laced water and, possibly, eating plants irrigated with the toxic water. [See Photos of the Mummy and Excavation Site]

"In Chile, you have these sediments that are rich in arsenic because of copper-mining activities in the highlands," which expose arsenic and other pollutants, said lead study author Ioanna Kakoulli, an archaeological scientist at the University of California, Los Angeles. "When it rains, the arsenic can leach out into the rivers."

In fields ranging from forensics to archaeology, hair is widely used to gain insight into the lives of modern and past peoples. Unlike other biological samples, such as bone and skin tissue that change over time, hair remains stable after it forms (keratinizes). This feature, along with hair's steady growth rate, means that it can provide a chronological record of the substances that previously circulated in the blood.

In the past, scientists have analyzed the hair samples of the mummies from the pre-Columbian populations that lived in Chile's Atacama Desert between A.D. 500 and 1450. The remains showed patterns of chronic poisoning, which some researchers have suspected was due to these populations' consumption of water contaminated with arsenic. But the methods didn't allow them to determine how the arsenic got into the mummies' hair.

"They didn't map where the arsenic is precipitated on the hair — they just took it and dissolved it," Kakoulli told Live Science. With this technique, you cannot tell if the arsenic wound up in the hair externally, or if it was ingested and traveled through the bloodstream first, she said.

To learn more about the possible arsenic poisoning of the ancient people from northern Chile, Kakoulli and her colleagues looked at a naturally preserved mummythat was buried in the TR40-A cemetery in the Tarapacá Valley of the Atacama Desert. Using portable techniques that were noninvasive and nondestructive, they imaged and analyzed the mummy's skin, clothes and hair, as well as the soil encrusting the mummy.

As expected, the team detected arsenic in the mummy's hair and in the soil. They also discovered skin conditions indicative of arsenic poisoning. Though these findings were suggestive of arsenic ingestion, they weren't definitive, so the researchers collected hair samples to analyze further in the lab.

Kakoulli and her colleagues imaged the hair samples with a very-high-resolution scanning electron microscope. They also subjected the samples to various tests with the synchrotron light source — a large particle accelerator that analyzes materials with intense, focused X-ray beams — at the Lawrence Berkeley National Laboratory in California, allowing them to map the distribution of the elements and minerals in the hair. [In Photos: Chilean Mummies Hold Nicotine Secret]

Furthermore, the dominant form of arsenic in the hair was a type called arsenic III, while the inorganic arsenic in surface water and groundwateris mostly arsenic V. Studies have suggested that the body "biotransforms" ingested arsenic into arsenic III.

"The results are consistent with modern epidemiological studies of arsenic poisoning by ingestion," Kakoulli said, adding that the technological approach used in the study could prove useful to forensic investigations and toxicity assessments in archaeology.

"It then becomes a question about the level of interaction they had with the people of the Amazon, because the seeds aren't from Chile," Kakoulli said. "They would've had to have known the properties of the seeds and where to get them."

The study was published in January in the journal Analytical Chemistry.