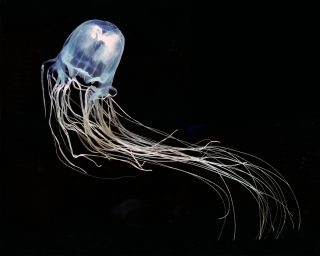 The lethal sting of the box jellyfish could one day be treated with a zinc compound, new research suggests
(Image: © Robert Hartwick)

Actress Anne Curtis was stung by a deadly box jellyfish while shooting a TV show in the Philippines Wednesday night (April 2).

Curtis was being treated at St. Luke's Medical Center in Bonifacio Global City, where doctors were keeping an eye on her rash and heartbeat, the actress tweeted, according to Inquirer.net.

"Been reading up on the box jellyfish and I'm lucky it wasn't fatal. This summer, be careful when swimming in the ocean [and] keep [an] eye out," Curtis tweeted.

The box jellyfish is one of the world's most poisonous animals. Even a smattering of venom can make the heart stop. Dozens to hundreds of people die from box jellyfish every year, anecdotal evidence suggests, though no official tallies exist. [Image Gallery: Jellyfish Rule!]

About 20 to 40 people die from box jellyfish stings in the Philippines alone, according to the U.S. National Science Foundation. The number of global fatalities from this cnidarian menace may be "seriously underestimated," the NSF adds.

About 50 species of box jellyfish are known to exist. The jellies have tentacles covered in tiny poison darts called cnidocysts. When the darts puncture the skin, they inject a toxin into the victim that enters the blood, where it can cause blood pressure to spike and stop the heart, researchers say.

Bigger box jellyfish are usually the most dangerous, because they sport more of these poison barbs. But even small box jellies have some poison.

Box jellyfish are also remarkable swimmers, largely thanks to 24 eyes that help them detect obstacles in their path.

So even though you may not see them coming, they'll probably see you.