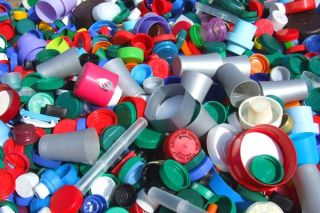 Darby Hoover is a senior resource specialist for NRDC. This Op-Ed was adapted from one that first appeared on the NRDC blog Switchboard. Hoover contributed this article to Live Science's Expert Voices: Op-Ed & Insights.

Recycling is one of the most common of all environmental activities, and it's also a great way to save natural resources. Recycling keeps useful materials out of landfills and incinerators, and using recovered materials to make new products and packages saves energy, water and resources such as trees and metal ores.

Recycling reduces global warming pollution, too. A 2011 report prepared by the Tellus Institute, "More Jobs, Less Pollution," found that if Americans can increase the national recycling rate to 75 percent by 2030, we would reduce greenhouse-gas emissions by 515 million metric tons carbon dioxide equivalent, which is equal to shutting down about 72 coal-fired power plants or taking 50 million cars off the road.

California is already a national recycling leader, with a 2010 recycling rate of just under 50 percent.Yet California still sends half of its solid waste to landfills or incinerators, missing the opportunity to recover valuable material resources. In 2011, California Governor Jerry Brown signed AB341, which requires that "75 percent of solid waste generated be source reduced, recycled, or composted by the year 2020." In order to better understand the economic potential of increasing recycling in California to 75 percent, NRDC commissioned the Tellus Institute to create a report, "From Waste to Jobs: What Achieving 75 Percent Recycling Means for California," which was released this month.

The NRDC report finds that more than 110,000 jobs could be created as a result of California's recycling goal. Meeting the 75-percent recycling goal would create more than 34,000 jobs in materials collection, 26,000 jobs in materials processing, and 56,000 jobs in manufacturing using the recovered materials. And in addition to the 110,000 jobs directly created, there would be an additional 38,600 indirect jobs created in sectors providing equipment and services to recycling-related businesses, as well as induced jobs from additional spending by the new employees.

Improved recycling of plastic is especially important, both in terms of jobs and for environmental benefits. Twenty-nine-thousand new jobs can be created from plastic recycling alone, and it can help reduce the amount of material that ends up in rivers, beaches and oceans.

In order to achieve the 75-percent recycling goal, California will need to recycle an additional 23 million tons of waste in 2020, which means creating additional policies and infrastructure to help increase recycling. And if Californians want to ensure that as many of those jobs as possible end up in the state, they need to develop incentives and policies that help keep new infrastructure, and the associated new jobs, in-state.

CalRecycle is currently developing recommendations for lawmakers to achieve the 75-percent target, including recommendations on expanding recycling facilities and markets — hopefully those recommendations will help guide the needed incentives and policy shifts. A critical piece of the strategy will be enacting and expanding product stewardship or extended producer responsibility programs that require producers of packaging to help support expansion of recycling infrastructure.

Working toward achieving California's recycling goal will benefit the environment, and it is also a great opportunity for the state to revitalize its economy by recapturing the value of recyclable materials and by creating green jobs. Throwing out useful materials like plastic, paper and metals is like throwing out money — by reconceptualizing waste as materials, and optimizing how materials are managed for the greatest utility, Californians can grow their green economy while helping preserve the natural environment.

This Op-Ed was adapted from "From Waste to Jobs: Growing California's Economy through Recycling," on the NRDC blog Switchboard. The views expressed are those of the author and do not necessarily reflect the views of the publisher. This version of the article was originally published on Live Science.