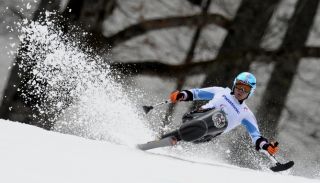 Watching the Paralympics makes us forget about the term “disability” and the idea that sport with a disability is about limitations. The athletes on the slopes and rinks at Sochi are showing us that theirs is a ruthless, competitive environment.

Alongside the athlete, technology has long been a part of sport. Every event, whether it’s cycling, sailing or skiing requires uniquely designed technology. Over in Sochi right now, athletes are showcasing the greatest of innovations being pushed to the limits of their design.

Visually impaired skiing at Sochi has attracted a lot of interest, with Great Britain’s gold medallist Kelly Gallagher and her guide Charlotte Evans taking gold with the help of bluetooth wireless headsets that enable them to communicate all the way down the slope.

In the visually impaired categories, the guide helps the athlete by skiing in front of them and telling them about the course and conditions through the headset. That is no mean feat when you consider the speeds involved and the degree of trust required between the two athletes when one of them is relying on the vision of the other.

Many Paralympians make use of a sit ski when they take to the slopes. This is essentially a seat mounted to a single ski. To help maintain control, the skier uses a pole in each hand which has a smaller ski mounted on the end.

The skiers might seem to start relatively sedately but by the time they are halfway down the slope, they are already moving at 60 miles an hour and still accelerating.

Since many of the athletes do not have lower limbs, they often have no easy means of absorbing the huge impacts, vibrations and shocks that able-bodied skiers would typically absorb using their legs when hurtling down hill at these speeds. Instead they use a sprung suspension system mounted below the chair, attached to the composite ski. The speeds are high, the crashes often severe and the technology has to help to maximise the former while not contributing to the latter.

Meanwhile, if outright speed isn’t your thing, consider biathlon. It combines the exhausting demands of cross-country skiing with the ability to periodically stop suddenly, compose yourself and then accurately fire a rifle at a series of targets. Visually impaired para-biathletes take a unique approach to the shooting side of the event, using electro-acoustic headphones to effectively “aim” by listening to a tone that varies in pitch as they move their gun on target.

You vs me and my metal cage

Over in team sports, sledge hockey players are putting their equipment under serious stress. The sport is played in the same way as conventional ice hockey and that includes all the high impact collisions. Players sit on metal sledge frames, which provide a protective cage for the lower part of their torso and limbs. These sledges have to survive the continual battering of players constantly charging into each with all their might throughout a 45 minute match.

That means bodily impact and impact from the from the formidable, multi-purpose sticks players wield in each hand. The engineers behind Paralympic ice hockey have designed the equipment with multiple needs in mind so these have a curved blade at one end to strike the puck an a metal pick at the other which gives the player the means to obtain traction and push forwards when they need to move.

One of the newest additions to this year’s Winter Paralympics is snowboarding, where prostheses are at the fore. Some of the athletes with a lower-limb amputation are using specialised prostheses that are vastly different to those you see in other sports, such as the Cheetah Flex Foot often used in athletics.

Some of the designs use linkages and pneumatic springs to help absorb the landing forces that snowboarders are often subjected to after extreme jumps. The design of these is challenging because the leg needs to maximise the athletes’ ability to absorb any impact yet perform manoeuvres without being restricted by weight and mobility. It also needs to be comfortable for the athlete as it attaches to their residual limb, which can be very sensitive.

The Paralympic Games showcases novel sports that require innovative solutions to get the best from athletes, be it through engineering, wireless technology or adaptation of traditional equipment. Years of training and preparation go into these sports but the outcome of each event can often be decided in just a few seconds of effort.

Bryce Dyer does not work for, consult to, own shares in or receive funding from any company or organisation that would benefit from this article, and has no relevant affiliations.