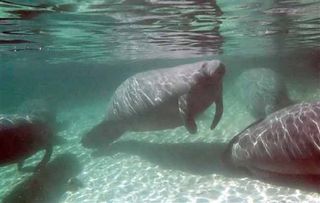 Manatees swim at Blue Springs State Park in Orange City, Fla., on Thursday, Jan. 5, 2006. 2005 was a hard one for the state's endangered manatee population. The number of confirmed manatee deaths increased 30 percent in 2005. The largest known cause of death is collisions with boats.
(Image: © AP Photo/John Raoux)

MIAMI (AP) -- The U.S. Fish and Wildlife Service might reclassify manatees as "threatened'' instead of "endangered,'' a move that would cause the animal to lose its endangered species protection, according to an internal memo obtained by The Washington Post.

The agency plans to say that the manatee "no longer meets the definition of an endangered species,'' according to the memo, which was sent to the White House.

A phone message left by The Associated Press with the U.S. Fish and Wildlife Service's Jacksonville office on Sunday evening was not immediately returned.

Chuck Underwood, a spokesman with the agency's Jacksonville office, told the Post that the memo was drafted after a review of the marine mammals, and government officials have not made a final decision on the issue yet.

"Until it gets final signatures on it, it could change,'' Underwood said. "It is an internal document. ... Is it the way we're going at the time? Yes. Is it also possible it could change? Yes.''

An annual census of the manatee population recorded 2,812 of the animals in Florida waters this year. Scientists counted 1,412 sea cows on the Atlantic Coast and 1,400 manatees on Florida's gulf coast.

Patrick Rose, executive director of the Save the Manatee Club, told the AP on Sunday that the classification switch means development and boating restrictions that were established to make the state safer for manatees might change as well.

"This is not the time to be moving to say that they're going to be downlisting (the manatees) and then dilute the protection for them,'' Rose said.