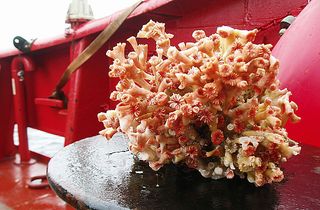 A cold-water coral that thrives in deep, dark water has been found growing off the shore of Greenland as a reef for the first time, scientists report.

A Canadian research ship sampling water near southwest Greenland's Cape Desolation discovered the Greenland coral reef in 2012, when its equipment came back to the surface with pieces of coral attached.

"At first, the researchers were swearing and cursing at the smashed equipment, and were just about to throw the pieces of coral back into the sea, when luckily, they realized what they were holding," Helle Jørgensbye, a doctoral student at the Technical University of Denmark who is studying the reef, said in a statement.

Cold-water corals have been found off of Greenland's west coast before, but never the stone coral Lophelia pertusa, and never as a reef, according to a report by the researchers published in the journal ICES Insight.

Scientists snapped pictures of the reef and collected coral samples on a return trip, also in 2012, led by the Bedford Institute of Oceanography in Nova Scotia.

A common cold-water coral, Lophelia pertusa built the reef, which is about 3,000 feet (900 meters) below the sea surface, in strong currents, close to where the edge of Greenland's continental shelf drops precipitously to the deep ocean floor. [Colorful Creations: See Photos of Incredible Coral]

Lophelia pertusa reefs — colored ivory and pink — also flourish off the coast of Norway and Sweden, where they reach 65 feet (20 m) in height, though only the top 4 to 8 inches (10 to 20 centimeters) is alive. The coral lives in relatively warm water carried north by ocean currents such as the Gulf Stream, where temperatures are 39 degrees Fahrenheit (4 degrees Celsius) or higher. The species can live without sunlight, unlike its warm-water cousins, many of which rely on sun-loving algae.

"The great Norwegian reefs are over 8,000 years old, which means that they probably started to grow after the ice disappeared after the last ice age," Jørgensbye said. "The Greenlandic reef is probably smaller, and we still don't know how old it is."

Little is known about the relationship between the reefs and other species, such as fish, but scientists think the coral reefs may serve as spawning grounds and hunting territory for redfish, monkfish and cod, among other species.