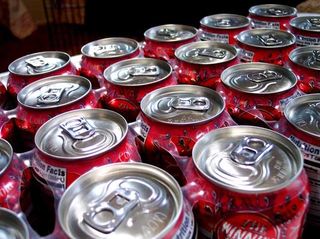 Drug companies aren't the only spin game in town when it comes to biased health-research claims.

The American Beverage Association (ABA), a trade association representing non-alcoholic beverage distributing and manufacturing companies, objected to the team's findings, throwing the bias claim back at them and their study.

The beverage-research bias finding comes from a systematic review, headed up by David S. Ludwig of the Children's Hospital, Boston, of 538 health-effects research papers on these commonly consumed non-alcoholic beverages published between January 1999 and December 2003.

Of these, the team focused on 111 research papers and found that 22 percent were sponsored entirely by a company in the food and beverage industry, 47 percent had no industry funding and 32 percent had some industry funding. The team then asked researchers with no knowledge of the sponsorship of each piece of research to categorize the conclusions of each paper as favorable, neutral or unfavorable.

The result was a strong correlation between industry-sponsored research and industry-favorable research.

"In view of the high consumption rates of these beverages, especially among children, the public health implications of this bias could be substantial," Ludwig and his colleagues wrote in their study.

In a press release, ABA President Susan K. Neely said the authors fail to explain why they excluded 332 of the 538 research articles. "By not disclosing the studies examined, it is entirely possible that articles were excluded simply because they did not prove the authors' point," she said.

However, Ludwig's paper includes a section that details the six criteria for selecting articles from the initial pull of 538, including that the study topic had to relate directly to soft drinks, juice or milk; at least one focus of the study had to be health, disease, or an indicator of disease; and the study had to focus on human rather than non-human subjects. A full list of the included articles is freely available upon request, he said.

Ludwig told LiveScience his advice to consumers: "When interpreting the results of a study, 'read the ingredients.'"

The high prevalence of industry funding for beverage studies surprised him a bit, Ludwig said.

"Over half of all studies we found had at least partial industry support, creating a considerable opportunity for financial conflict of interest to bias the literature," he said.

The findings come on the heels of recent reports that health research sponsored by drug companies are more likely than independent reviews to rate drugs favorably.? Some researchers have found that drug companies provided 30 percent of the $100 billion spent on biomedical research in the United States in 2004, Ludwig and his colleagues write in the journal PLoS Medicine, raising concerns about bias.

The new study focuses only on some non-alcoholic beverages, and it remains to be seen if such funding bias occurs throughout nutritional research, Ludwig's team states. If it does, it could be more of a problem for public health. Bias in drug research affects the health of those who take the drugs, while bias in nutritional research affects everyone's health, the scientists point out.

Bias always exists in science, coming from such sources as politics, career considerations and longstanding scientific viewpoints. But these types of bias tend to cancel one another out, Ludwig and his colleagues write. With financial conflicts of interest, the bias all goes in one direction, they said.