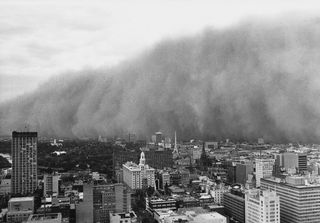 On Feb. 8, 1983, a massive dust storm advanced on Melbourne, Australia. The dust storm was a consequence of devastating droughts induced by an extreme El Niño.
(Image: © Australia Bureau of Meteorology/Photographer: Trevor Farrar)

The most intense El Niño events may soon hit every 10 years, instead of every 20 years, thanks to warming water in the eastern Pacific Ocean, a new study predicts.

An El Niño is the warm phase of a long-standing natural climate cycle in the Pacific Ocean. When changing wind patterns start piling up warm water in the eastern part of the equatorial Pacific, the redistribution of hotter water triggers changes in atmospheric circulation that influences rainfall and storm patterns around the world — an El Niño.

During extreme El Niños, sea surface temperatures warmer than 82 degrees Fahrenheit (28 degrees Celsius) develop in the normally cold and dry eastern equatorial Pacific Ocean. Because this part of the Pacific is typically colder than the western Pacific, even 0.8 degrees Celsius (about 1 degree Fahrenheit) of warming in these waters has an outsize effect, said lead study author Wenju Cai.

"Under global warming, the barrier to convection shifts," Cai told LiveScience. "Therefore, it is easier to generate this massive atmospheric circulation associated with an extreme El Niño event." (Convection is the process that fuels storms.)

During extreme El Niños, this warm-water zone stretches across the entire equatorial Pacific Ocean. Because the Pacific's sea surface temperatures are rising, climate researchers have tried to predict the impact of global warming on extreme El Niños, but their models have produced conflicting results, said Cai, a climate scientist at CSIRO Marine and Atmospheric Research, a government research organization in Aspendale, Australia. [Infographic: Earth's Atmosphere Top to Bottom ]

"If we just look at sea surface temperatures, there has been no consensus," Cai said.

To better gauge the effect of future warming on the El Niño cycle, Cai and an international group of climate scientists redefined an extreme El Niño. Their study tested 20 climate models that simulated extreme El Niños, but instead of looking at sea surface temperatures, they defined each episode as an increase in rainfall by a factor of 10 over the eastern equatorial Pacific. The results show an increase from an extreme event every 20 years to an episode every 10 years from the present day through the next 100 years. The findings were published today (Jan. 19) in the journal Nature Climate Change.

While the increased frequency could be a boon for the drought-stricken western United States, which would receive extra rainfall, an extreme El Niño has devastating global effects.

During past extreme El Niño events, countries in the western Pacific, such as Australia and Indonesia, experienced devastating droughts and wildfires, while catastrophic floods occurred in the eastern equatorial region of Ecuador and northern Peru. The last extreme El Niño, in 1997-1998, caused $35 billion in damage in the United States and killed an estimated 23,000 people worldwide.

"Extreme El Niños cause a lot of loss of life and productivity," Cai said.