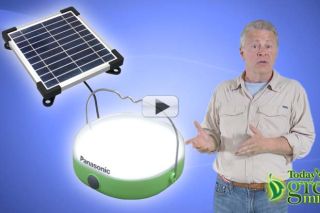 Flicking a light switch on and expecting illumination is such an ingrained idea for some people (at least those reading articles on the Internet) that it's easy to forget about the 1.3 billion people around the world without easy access to electricity.

Instead of electric lights, many of these people use lanterns that burn fuels such as kerosene to provide light at night. Toxic smoke, expensive petrochemical fuel, low illumination and the constant fire hazards make these lanterns poor alternatives to electric lighting. These problems can accumulate and become much larger issues for the economy, education and health care of an entire region by restricting what people can do at night.

Panasonic, the company known for plasma TVs and other high-end electronics, is putting its knowhow to the task of fixing this problem. As part of the company's 100th birthday celebration, Panasonic plans to give away 100,000 next-generation solar lanterns to people without access to dependable electric lighting.

International charitable organizations and governments will handle the distribution of the "100 Thousand Solar Lantern Project," which aims to give away all of the lanterns by the 100th anniversary of Panasonic's founding, in 2018.

This won't be the first time Panasonic has given people in need solar-powered lighting. Since 2006, the company has given away solar lanterns to developing nations. However, the latest generation of Panasonic's solar lanterns will provide brighter illumination with five LED bulbs and a USB port that can charge small electronics like a cellphone or radio.

Panasonic's bright idea will reduce fires caused by kerosene lanterns, cut down on consumption of fossil fuels and their attendant pollution, and bring light to thousands of homes in need. And that makes for a pretty good 100th birthday present.