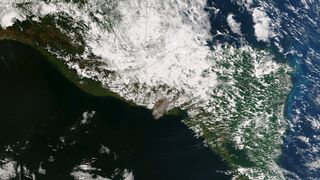 A volcano erupted in El Salvador over the weekend for the first time in decades, spewing a huge plume of ash and gas that could be seen from space.

The powerful, Earth-observing Suomi NPP satellite captured an image of the cloud of debris over the Chaparrastique volcano on Sunday (Dec. 29) 1:20 p.m. local time (19:20 UTC), about two hours after the eruption began, using its Visible Infrared Imaging Radiometer Suite, or VIIRS. The billowing ash was also spied by the Moderate Resolution Imaging Spectroradiometer, or MODIS, aboard NASA's Aqua satellite.

Flights were redirected and canceled in light of the eruption and officials have urged residents in nearby San Miguel — a city of more than 200,000 — to evacuate their homes and go to shelters, CNN reported. The last time Chaparrastique erupted was 1976.

NASA's Ozone Monitoring Instrument measured high concentrations of sulfur dioxide, a volcanic gas, over the site of the blast. That, combined with the strength the eruption, suggests some fresh lava was involved in the blast, according to NASA's Earth Observatory.