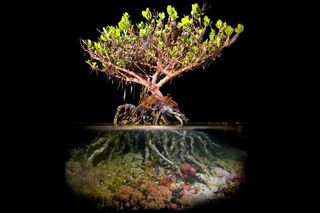 "Mangroves showed the largest increases in regions where cold snaps became less frequent over the past 30 years," study co-author Kyle Cavanaugh, an ecologist at the Smithsonian Environmental Research Center in Maryland, wrote in an email.

The findings, published today (Dec. 30) in the journal Proceedings of the National Academy of Sciences, suggest that climate change could alter ecosystems even more dramatically in the years to come.

Mangrove forests typically grow in tidal regions in tropical and subtropical climates. They serve a vital ecological function: The trees and shrubs that live in these regions can thrive in salty water, shifting sands and hot temperatures, and tree roots trap sediments, slowing the lapping of water and allowing other life to flourish.

To see how climate changes have affected Florida's mangrove forests, Cavanaugh and his colleagues looked at 28 years of satellite data from Florida's East Coast. They found that the area taken up by mangrove forests in the northernmost latitudes had doubled over the last few decades, while the southern stretches changed little.

This expansion wasn't connected to changes in average temperature, sea level rise, rain or land use. Instead, the regions with expanding mangroves experienced fewer cold snaps — periods when the temperature dips below 25 degrees Fahrenheit (minus 4 degrees Celsius).

The new results imply that mangrove forests may expand quickly with global warming in the coming decades. Though what this means for surrounding communities and the life that depends on the forests isn't yet clear.

"Right now we don't have enough information to determine if this is good or bad for humans," Cavanaugh said. "As mangroves expand they displace salt marsh. Both of these habitats are important ecologically and economically, and both are threatened by rising sea levels and coastal development."

"There is evidence that the ranges of mangroves in other parts of the world are also restricted by cold temperatures," Cavanaugh said.

And because water-dispersed plants can often travel farther than those dispersed by wind or plants, the mangrove expansion could be very rapid, the authors write in their paper.