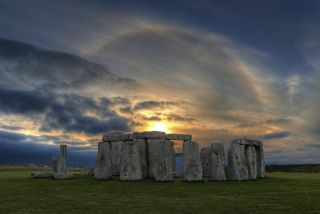 This weekend marks the beginning of the end. Of winter's darkness, that is.

Today (Dec. 21), those living in the Northern Hemisphere celebrate the mark of increasingly longer days, those in the Southern Hemisphere will transition to shorter days, and those at the equator won't notice much of a difference at all.

The global discrepancy in seasonal sunlight results from Earth's 23.5-degree tilt on its axis: During the Northern Hemisphere winter, the Earth is tilted directly away from the sun, and during the summer, it is tilted directly toward the sun. The equator does not experience much of a change during the year since it sits in the middle of the axis.

For many ancient civilizations that struggled to subsist through harsh winter months, the winter solstice marked a time of spiritual rejoice and celebration. Modern heating technology and the globalization of food markets make the seasonal transition remarkably easier for modern humans to survive, but people still do celebrate the day with festivities and rituals, including a tradition of reading poetry and eating pomegranates in Iran, and the Guatemalan ritual known as polo voladore — or "flying pole dance" — in which three men climb to the top of a 50-foot-tall (15 meters) pole and perform a risky dance to flutes and drums. [Winter Solstice: Sunrise & Sunset Times in US Cities]

Still other people celebrate the day by tuning into the spiritual rituals of ancient civilizations and visiting the sites of winter solstice tributes. Here are six archaeological sites that researchers believe pay tribute to the winter solstice:

Stonehenge — one of the most famous archaeological sites in the world — is an arrangement of rocks carefully positioned on a barren ground in southern England. The megalith, which may have been a burial, was built between 3000 B.C. and 2000 B.C., over the course of roughly 1,500 years, in a series of several major phases.

When the sun sets on the winter solstice, its rays align with what are known as the central Altar stone and the Slaughter stone — an event that hundreds of families, tourists, Wiccans, and others visit each year to experience what researchers believe was an important spiritual event for those responsible for creating the monument. [5 Strange Theories About Stonehenge]

The Newgrange monument is located northeastern Ireland, and is thought to date back to about 3200 B.C. The mound, with grass on its roof, rises from a green field and, inside, contains a series of tunnels and channels. During sunrise on the winter solstice, the sun pours into the main chambers, which researchers have interpreted to mean it was built to celebrate this special day of the year.

Built in Orkney, Scotland, around 2800 B.C., Maeshowe is another burial ground that appears as a grassy mound rising about 24 feet (7.3 m) above a grassy field. Similar to Ireland's Newgrange, the inside of the mound contains a maze of chambers and passageways that become illuminated by sunlight during the winter solstice.

The Goseck circle is a series of concentric rings dug into the ground — the largest of which measures about 246 feet (75 m) in diameter — located in Saxony-Anhalt, Germany. It dates back to about 4900 B.C., but was forgotten and covered by a wheat field before being discovered through aerial surveys in the early 1990s. Archaeological remains suggest Goseck circle was the site of religious rituals, such as sacrifices.

Upon discovery and excavation, researchers realized that two gates cut into the outermost circle aligned with the sunrise and sunset of the winter solstice, suggesting this the circle was somehow a tribute to the solstice.

Located on the eastern coast of Mexico's Yucatan Peninsula, Tulum is an ancient stone-walled Mayan city whose population collapsed around the 15th century when Spanish settlers had begun to occupy Mexico, bringing new disease that wiped out large portions of the Mexican population. Much of the stone buildings that made up the city still stand today. One of these buildings contains a small hole at its top that produces a starburst effect when the sun rises on the winter (and summer) solstice.

Earlier this year, researchers discovered two stone lines that, when approached straight on, appear to frame Peru's Cerro del Gentil pyramid in the distance. The lines are located roughly 1.2 miles (2 kilometers) southeast of the pyramid, and extend about 1,640 feet (500 m). Using 3D-modeling software, the researchers discovered that the winter solstice sun sets exactly where the lines converge on the pyramid in the horizon.