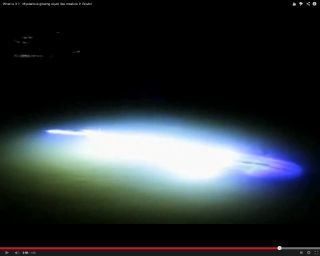 A glowing "creature" was seen in the waters of Bristol, England.
(Image: © YouTube screengrab from kaanusanyal vemula)

Strange and wondrous creatures fill the seas, and even after eons of living near and traveling across the world's oceans, people are still amazed by the seas' rich biological diversity.

Take, for example, the recent sighting of a mysterious glowing sea-beast — the video of which is now making its way across the Internet — that brought considerable delight and wonder to the people who witnessed the odd-looking creature moving through the harbor in Bristol, England.

Adding to the mystery is the fact that nobody could determine what exactly the luminous object might be. Was it another cheap online hoax? Or a shimmering example of bioluminescence, the ability of some animals to convert chemical energy into light? [Gallery: Eye-Catching Bioluminescent Wonders]

But without a first-hand examination of the glowing object, most scientists shied away from speculating about what the thing might be. A few guesses: It could be a large, deep-sea squid that surfaced from much deeper waters offshore, or some kind of object — animate or inanimate — covered in bioluminescent bacteria.

"It's very intriguing. I don't really know what to make of it," Steve Simpson, a biologist at Bristol University, told the Daily Mail. "There is a possibility that it is a special type of jellyfish or a marine salp," which is a long, sinuous invertebrate marine animal.

Eventually, however, the jig was up: The squid-like creature was actually a publicity stunt for a new British television program called "The Happenings," which premieres on Monday (Dec. 9).

"In 'The Happenings,' magicians … use techniques of illusion to bring incredible movie-like experiences to British and American towns," Steve Hornsey, general manager of British TV channel Watch, told The Telegraph.

Videos of the glowing object have racked up millions of viewers and comments on social media in recent days. Some wondered if a creature had escaped from the local zoo; others attributed the phenomenon to street artist Banksy.