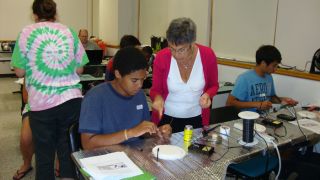 In certain classrooms across the country, students solder wires and attach components to build water quality sensors. Other students use laptops to write computer programs designed to calibrate the sensors, log the incoming data and connect microprocessors in a wireless sensor network to be deployed nearby.

These classrooms are not graduate research labs or even advanced undergraduate courses, but high school and middle school classrooms.

The program is called SENSE IT, which stands for Student Enabled Network of Sensors for the Environment using Innovative Technology. Over the past four years, this National Science Foundation-funded initiative has brought environmental sensor technology into schools to give students the kind of hands-on collaborative experiences that lead to sustained inquiry and mastery of STEM principles.

Since SENSE IT began, about 2,000 students have built, calibrated and tested sensors and circuits designed to measure water temperature, conductivity, turbidity and depth.

Here's how the program works:

SENSE IT offers professional development workshops during which teachers learn how to construct and calibrate sensors using multimeters, thermistors and other electrical materials. They learn to make several types of sensors — temperature, conductivity, turbidity and depth — and to create a wireless sensor network.

Then they receive supplies and instructions for building sensors with students back in their classrooms. The goal is to have students design, build, deploy and interpret data from their own water quality sensors.

Students construct their sensors from scratch, using standard off-the-shelf electronics components. Teachers lead them through the physics principles, circuitry and mathematical analysis required to build each sensor. This approach eliminates the "black box effect" associated with use of commercially available probes (with which students don't gain insight into the underlying workings of the technology). The students then interface their sensors with small computers that they program to gather and log data. Finally, they use wireless communication protocols between multiple computers to create their own wireless distributed sensor network.

All of this exposes students to a wide range of core knowledge of mathematics and physical science and practical hands-on technology skills such as soldering and debugging circuits.

"It expanded my horizons as far as what can be done, helped me learn about what students enjoy doing and will encourage the use of more electronics in the future," said one teacher participant. "It made electronics less intimidating."

The researchers on the project found high levels of satisfaction among both teachers and students, while changes from pre-test to post-test showed that the students had improved their knowledge of electrical circuits and their algebraic thinking. The results were particularly strong for students in low socioeconomic schools and for the weaker students in all schools.

SENSE IT participants have applied their knowledge of sensors and sensor networks to projects entered in regional and national competitions like the INTEL International Science and Engineering Fair, INTEL Science Talent Search and successful applications for prestigious college scholarships.

One student, Max Diamond, is in the process of applying for a patent based on original work inspired by his participation in SENSE IT. "I have always been a tinkerer and builder, but working with SENSE IT enabled me to think about what sensors can do and can now dream up something and build it."